Home Wealth You’re paying too much for small stocks 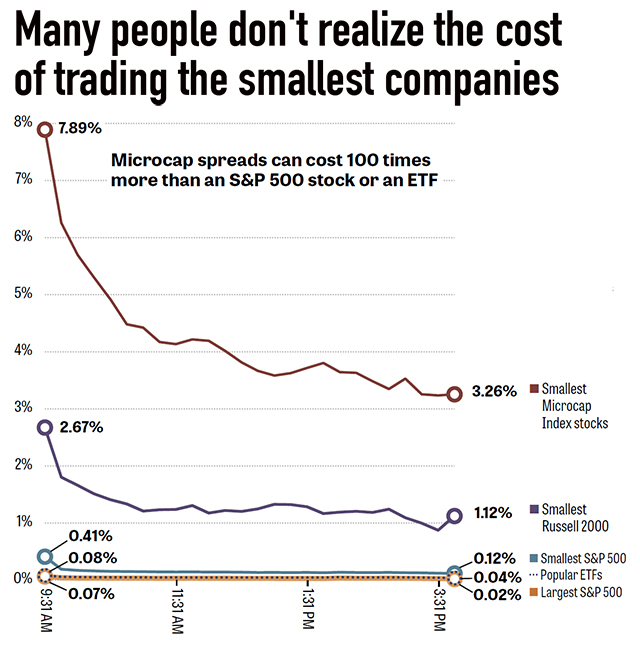 With the volatility in the stock market lately, the last thing you want is high fees cutting into your gains.

There’s one kind of “fee,” however, that doesn’t show up on your brokerage statement. It’s the “spread” — the difference between the price you pay to buy a stock or exchange-traded fund and the amount you’d receive at the same time to sell it.

The graph below shows the average haircut for large and small stocks. The stocks with the lowest volume — the smallest companies in the Russell Microcap Index


— can cost you almost 8% if you purchase shares when the market opens and sell the same shares a moment later.

Unless you’re a high-frequency trader, your holding period is probably a lot longer than one second. But with an 8% spread, selling a small stock and buying another one nine times a year could eat up more than half of your invested capital — just from the spreads alone.

How might you lose 8% in each round trip? Let’s say you buy 100 shares of Microcap Company X for $100 each, which is the “ask price.” Even if the stock’s headline price is unchanged when you sell the shares — whenever that may be — the “bid price” you receive could be only $92 per share.

Who decides this? A class of institutions known as “market makers.”

Market makers are brokerage firms and other financial players. They buy and sell stocks and ETFs all day long. They’ll usually handle your trade, even if no other party is willing to take the opposite side at that exact moment.

Market makers aren’t evil — they’re an essential “lubricant” if you want your trades to be filled quickly. The bid-ask spread is the percentage that market makers charge to offset their risk. After all, a market maker that buys a security might lose money if the share price moves the wrong way before the position is handed off.

The problem is that most investors don’t realize how much the spread costs them. No matter what stocks or ETFs you buy today, you or your heirs will want to sell the shares eventually. That’s when a high bid-ask spread can be an unpleasant surprise.

A new study shows that the spreads on microcap stocks can be 100 times the spreads market markers charge for the most liquid ETFs and stocks. Hugh Todd, the CEO of ETFScreen.com, a free service that backtests ETFs, recorded the spreads for different stocks and ETFs at my request.

Todd (with support from Web developer John W. Gelm) preserved bid and ask prices every five minutes for two weeks, using Xignite data from Dec. 10 through 21. The graph above shows the average of every 15-minute period. (Disclosure: ETFScreen also provides financial analysis to MuscularPortfolios.com, a website I manage.)

The differences in spreads can be shocking. Here’s the amount you can lose every time you buy and sell a stock or an ETF:


of course, are names you know. Mega-corporations from Apple


are in the top 10, with market capitalizations over $300 billion or so. Being household words, these giant companies trade for tiny spreads. On the average, you’ll lose only 0.07% if you trade first thing in the morning (7 cents per $100) or 0.02% near the close.

• The smallest companies in the S&P 500, of course, are still big names. For example, Urban Outfitters


with a market cap under $4 billion, and Frontier Communications


is usually thought of as America’s “small cap” index. The smallest Russell 2000 stocks in ETFScreen’s study include Remark Holdings


at a market cap of about $46 million, all the way down to Vital Therapies

• The real story is the Russell Microcap Index. This group includes companies that trade so sparsely that they can’t even be called “small-caps.” You can be forgiven if you don’t recognize the smallest names: companies like Rosehill Resources and Boxlight Corp.

Some companies in the Microcap Index may actually have larger market values than a few of the Russell 2000 components. But microcap trading volume is small. For instance, Rosehill Resources’


average daily volume is under $1 million. By comparison, over $2.6 million worth of the Russell 2000’s Vital Therapies stock changes hands daily.

There’s nothing wrong with being small. But the spreads can be huge: The smallest stocks in the Microcap Index ding you an average of 7.89% near the market open and a still very high 3.26% by the end of the day.

Worst of all, those averages conceal variations you could drive a truck through. Some individual microcaps in ETFScreen’s study displayed staggering spreads of more than 14% at the open and 6% at the close.

Costs like those might make you want to stick your money under a mattress. At least no one’s charging you a spread when you stash your cash. (However, you might have to lift up a bedspread.)

• The popularity of index funds is due in part to their low costs. Some ETFs today boast annual fees as low as 0.03%. ETFScreen’s study now reveals that widely used ETFs also have lower bid-ask spreads than many companies in the S&P 500. The average spreads of popular ETFs are a very reasonable 0.08% near the market open and a minuscule 0.04% near the end of the day.

Problem: There are too many ETFs to monitor — more than 2,000 in the U.S. alone. So the ETFScreen study concentrated on 19 ETFs that are recommended in “Muscular Portfolios.” (Disclosure: I am the book’s author.)

If you’re an individual investor, you can take advantage of ETFScreen’s study with a few simple rules:

• Look for bid and ask prices whenever you buy or sell a security. Some prices you see at your online brokerage might be “midpoint prices,” which are halfway between the bid and the ask. But remember, you don’t get the midpoint price but the bid or ask price when you sell or buy a stock. If the spread is 3% or more, ask yourself whether that much of a drag on your gains might make your trading strategy unprofitable.

• Don’t place market orders when the market is closed. Market makers can and do charge enormous spreads if more “sell” than “buy” orders (or vice versa) came in before the market opened. That’s why spreads are so high in the first 60 minutes of the market day. Some traders place limit orders, which specify acceptable prices. But many limit orders are never filled. If that happens to you, and you keep changing a limit order to chase a price, you might end up worse off than if you’d used a market order in the first place.

• Watch out for after-hours trading. ETFScreen’s study didn’t monitor spreads that were offered more than 15 minutes before and after regular market hours. But massive spreads afflict some securities before 9:30 a.m. and after 4 p.m. ET.

• Consider buying ETFs rather than small stocks. All the stocks in the Russell Microcap Index can be purchased using, for example, iShares’ IWC


exchange-traded fund. IWC’s average spread is 0.58% in the morning and 0.32% near the close, which is pricey but not ridiculous. Even better, investors who follow Lazy Portfolios and Muscular Portfolios can rely entirely on highly liquid ETFs, whose spreads are tiny, and eliminate the risks of individual stocks.

Be aware: The average spreads in the study are based on quotes for as few as 100 shares. What if you went insane and placed a market order for 100,000 shares of some tiny company? A market maker might happily charge you an astronomical spread—much larger than your computer monitor may show. Buying a large quantity of a popular ETF, by contrast, is not as subject to price gouging.

A technical note: ETFScreen’s study is not public yet. However, if you’re interested in the raw data, you can download a spreadsheet here. 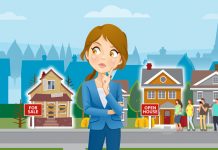 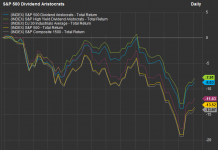 Each house electrified! These 14 states now have 100% household electrification, and West Bengal...

IDFC Bank to be renamed as IDFC First Bank

This troubling trend may wreak havoc on the stock market, analysts...