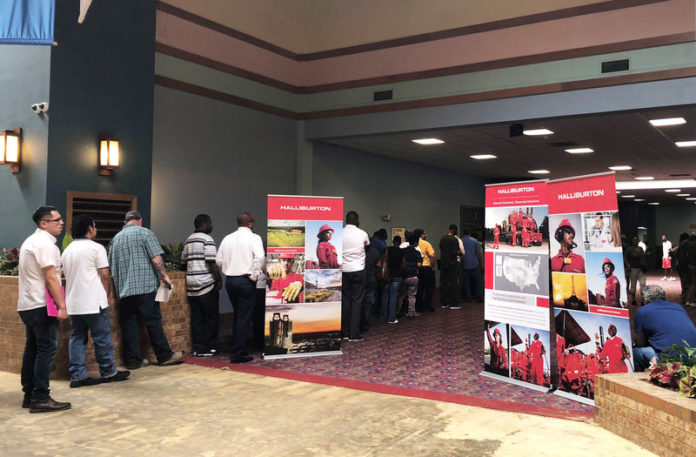 © Reuters. FILE PHOTO – Job seekers line up at a job fair of an oil services giant Halliburton at the MCM Grande Fundome hotel in Odessa Texas

The Labor Department will publish its closely watched monthly employment report on Friday against a backdrop of a steep sell-off on Wall Street and a partial inversion of the U.S. yield curve, which have stoked fears of a recession.

Stocks have been mostly hurt by uncertainty whether a 90-day truce agreed by President Donald Trump and President Xi Jinping over the weekend will hold and lead to a lasting easing of trade tensions between the world’s two largest economies.

Nonfarm payrolls probably increased by 200,000 jobs last month, according to a Reuters survey of economists, after surging 250,000 in October. The unemployment rate is forecast steady at near a 49-year low of 3.7 percent.

Average hourly earnings are seen up 0.3 percent in November after gaining 0.2 percent in October. That would leave the annual increase in wages at 3.1 percent, matching October’s jump, which was the biggest gain since April 2009.

A strong employment report would allay fears about the economy’s health and increase the probability of the Fed raising interest rates more than once next year.

“Since the Fed is now very data-dependent, stronger data should give the market more confidence that the Fed will continue hiking in 2019,” said Veronica Clark, an economist at Citigroup (NYSE:) in New York. “We think the Fed will go twice next year.”

Financial markets are pricing in one rate hike from the Fed in 2019, compared with expectations for possibly two rate hikes a month earlier, according to CME Group’s FedWatch program. The U.S. central bank is expected to increase borrowing costs on Dec. 18-19 for the fourth time this year.

Fed Chairman Jerome Powell last month appeared to signal the central bank’s three-year tightening cycle was drawing to a close, saying its policy rate was now “just below” estimates of a level that neither cools nor boosts a healthy economy.

Minutes of the Fed’s November policy meeting published last week showed nearly all officials agreed another rate increase was “likely to be warranted fairly soon,” but also opened debate on when to pause further hikes.

Wage growth could surprise on the upside after online retail giant Amazon.com Inc (O:) raised its minimum wage to $15 per hour for U.S. employees last month in the face of tightening labor market conditions.

Soft October data on the housing market, business spending on equipment as well as a jump in the trade deficit to a 10-year high have heightened fears the economy is slowing.

Growth forecasts for the fourth quarter are around a 2.7 percent annualized rate. The economy grew at a 3.5 percent pace in the third quarter.

Job gains have averaged 212,500 per month this year, double the roughly 100,000 needed to keep up with growth in the working-age population. But there are signs of potential speed bumps ahead. The number of Americans applying for unemployment benefits is near eight-month highs.

General Motors (N:) has announced plans to cut up to 15,000 jobs in North America next year, which will affect some assembly plants in the United States.

For now, the labor market is on solid footing and is seen supporting the economy through at least early 2019, after which growth is expected to significantly slow as the stimulus from the Trump administration’s $1.5 trillion tax cut package fades.

“Even if layoffs are beginning to pick up in some areas, the fact that many industries are reporting worker shortages and unfilled vacancies suggests that aggregate payrolls could continue to expand,” said Lou Crandall, chief economist of Wrightson ICAP (LON:) LLC in Jersey City, New Jersey.

Hiring last month was likely across all sectors. An early Thanksgiving is expected to have boosted retail employment while transportation and warehousing payrolls probably rose, driven by seasonal hiring.

However, an unusually cold November probably slowed hiring at construction sites after companies added 30,000 workers to their payrolls in October.

Manufacturing employment is forecast increasing by 20,000 jobs last month after rising 32,000 in October.

These stocks are the most sensitive to soaring bond yields