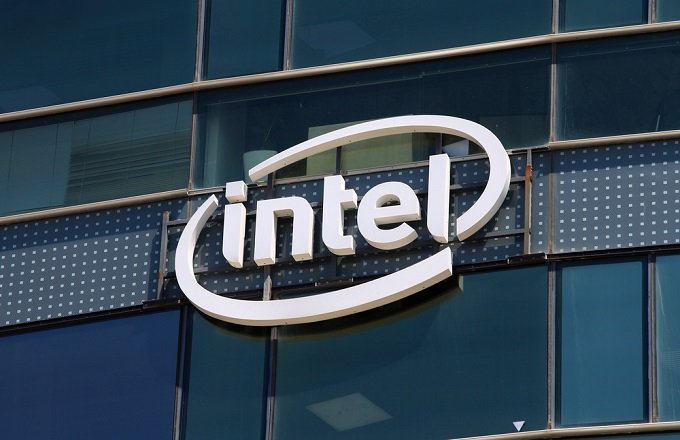 Dow component Intel Corporation (INTC) is trading higher on Friday morning after beating third quarter profit and revenue estimates in Thursday’s post-market release. The chip maker also raised fourth quarter guidance by a healthy margin, but the broad tech swoon may forestall a more bullish reaction, and those gains could evaporate if the Nasdaq-100 index doesn’t bounce strongly after the opening bell.

Many sector analysts have raised alarm bells in recent months, concerned about shrinking demand and/or weak pricing. The PHLX Semiconductor Index (SOX) has reacted to these bearish views, turning lower after building a year-long topping pattern near the 2000 bubble high. The index has now broken range support and the 200-day exponential moving average (EMA), raising the odds for downside that could carry another 15% before attracting dip buyers.

The stock cleared three-year resistance at a split-adjusted $1.31 in 1990 and entered a powerful trend advance, gaining ground throughout the decade while splitting four times. It topped out in the mid-$70s in March 2000 and turned lower six months later, entering a severe downtrend that ended in the lower teens in October 2002.  A bounce into 2004 failed to pierce resistance in the mid-$30s, yielding a secondary decline that ended within four points of the 2002 low in 2006.

A 2007 rally got sold aggressively in the upper $20s, generating a downtick that accelerated during the 2008 economic collapse. That impulse finally ended after the stock broke the 2002 low by less than one point, marking a historic buying opportunity, ahead of a recovery wave that stalled below 2007 resistance in 2012. It cleared that barrier two years later and mounted the 2004 high by less than four points before sellers returned once again.

Price action held a six-year trendline of higher lows in 2015, setting the stage for the strongest buying impulse so far this century. It carved three rally waves into June 2018’s 17-year high at $57.60 and reversed in a decline that is still holding 12-month range support in the low $40s. The monthly stochastics oscillator fell into oversold territory in September but hasn’t crossed to the upside, indicating that selling pressure may continue through the fourth quarter.

The four-year pattern has drawn a cup and handle, with a breakout above resistance at $37.70 generating a healthy uptrend, followed by a pullback. The 50-month EMA has now risen into new support, along with the raising lows trendline posted between 2015 and 2017. This harmonic convergence should support a low-risk buying opportunity in the upper $30s if the downturn continues in coming weeks.

A Fibonacci grid stretched across the rally wave that ended in June 2018 organizes price action, placing the October 2017 continuation gap right under the .618 retracement level. Declines have tested the top of the gap four times, but the gap hasn’t filled, highlighting the importance of the zone between $41.50 and $42.75. Fortunately for bulls, continuation gaps can remain unfilled for years, so this level may be defensible in the coming weeks.

Conversely, a breakdown would expose the upper $30s and 2017 breakout support, which has aligned at the .786 retracement level. It’s tough to visualize a scenario in which Intel fails that breakout between now and the start of 2020, highlighting the potential buying opportunity. However, this stock can get stuck in relatively narrow trading ranges for years at a time, so booking a profit may require a long-term holding period.

Intel buyers are active on Friday morning, despite a broad overnight downturn. This resilience may get tested in the regular session, especially if the Nasdaq-100 rolls over and posts a new monthly low.