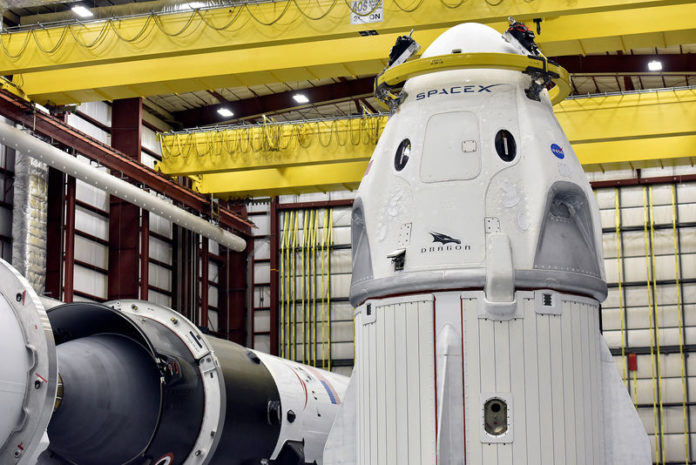 © Reuters. The Dragon crew capsule sits in the SpaceX hangar at Launch Complex 39-A, where the space ship and Falcon 9 booster rocket are being prepared for a January 2019 launch at Cape Canaveral

(Reuters) – Billionaire Elon Musk’s SpaceX Falcon 9 rocket is scheduled to blast off on Thursday after two canceled launches earlier this week due to last-minute technical problems, but poor weather is looming as a potential problem.

The rocket will carry a roughly $500 million global positioning system (GPS) satellite built by Lockheed Martin Corp (NYSE:) and is due to take off from Florida’s Cape Canaveral shortly after 9 a.m. local time (1400 GMT).

Weather will be a challenge on Thursday morning, with only a 20 percent chance of favorable conditions because severe thunderstorms and wind gusts are predicted for south and central Florida’s so-called Space Coast on Thursday, said Patrick Burke, a meteorologist with the National Weather Service’s Weather Prediction Center in College Park, Maryland.

“It’s almost a near certainty that Cape Canaveral will get thunderstorms in the morning, with some severe winds,” Burke said. “A cold front bringing the rain is moving in from off shore.”

Burke said the weather might not clear up until Saturday.

SpaceX halted the planned launch minutes before lift-off on Tuesday due to a technical issue, although it said later the rocket and payload “remain healthy.”

The launch was also canceled early on Wednesday due to a technical issue with the rocket.

A successful launch would be a significant victory for Musk, an entrepreneur who spent years trying to break into the lucrative market for military space launches long dominated by Lockheed and Boeing (NYSE:) Co.

SpaceX won an $83 million Air Force contract in 2016 to launch the GPS III satellite, which will have a lifespan of 15 years.

Thursday’s launch is set to be the first of 32 satellites in production by Lockheed under contracts worth a combined $12.6 billion for the Air Force GPS III program, Lockheed spokesman Chip Eschenfelder said.

The launch was originally scheduled for 2014 but has been hobbled by production delays, the Air Force said.

The next GPS III satellite is due to launch in mid-2019, Eschenfelder said, while subsequent satellites undergo testing in the company’s Colorado processing facility.