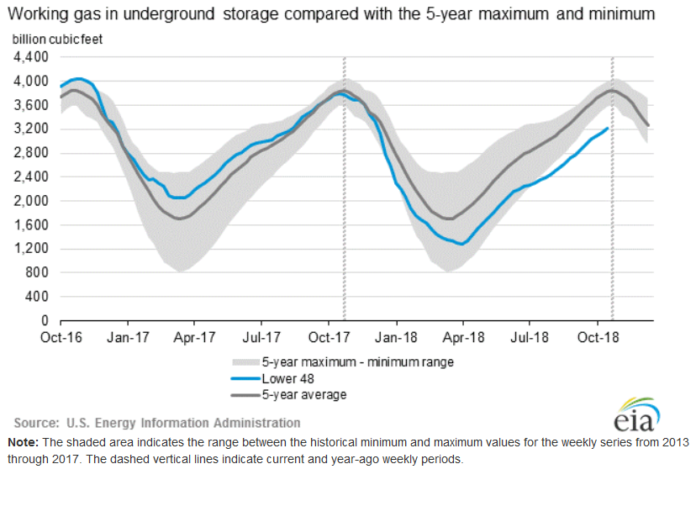 Natural-gas futures rallied on Friday to their highest finish in nearly two years, with cold weather expected to boost demand for a commodity that is running tight on supplies.

“This year we entered the withdrawal season over 600 [billion cubic feet] below normal,” he said. “The lowest we have had relative to the five-year average in the last 22 years was 266 Bcf in 2014.” The withdrawal season, when supplies start to decline as cold weather sets in, typically runs from Nov. 1 through March 31.

Read: Natural-gas prices set to heat up just as temperatures start to fall


climbed 17.6 cents, or 5%, to settle at $3.719 per million British thermal units. Front-month contract prices haven’t settled at a level that high since Dec. 30, 2016, according to data from Dow Jones Market Data.

Futures prices also ended the week with a roughly 13% gain. That marked the largest weekly percentage climb since the week ended Jan. 12 of this year, according to Dow Jones Market Data.

“As I look out my window and see snow falling, it appears the early onset of winter continues to boost speculation that we could see higher heating demand this year at a time when supplies are already running below average,” said Colin Cieszynski, chief market strategist at SIA Wealth Management, who is based in Ontario, Canada. “Not only are supplies low, but winter has arrived early in many parts of the continent.”

In the U.S., the Energy Information Administration on Thursday reported a bigger-than-expected weekly rise in domestic natural-gas supplies, but inventories in storage totaled 3.208 trillion cubic feet—621 billion cubic feet below the five-year average.

Richey, however, also noted that a pullback toward $3.20 to $3.30 is “not out of the question in the weeks ahead, especially given the right bearish headline as the market is overbought.”

Long term, “the bullish fundamentals are being underscored by the widening gap between current inventory levels and the five-year minimum levels,” he said, pointing out that the technicals are bullish as well, with prices at multimonth highs.

NATO cyber command to be fully operational in 2023 By Reuters

How Apple is losing its grip on India By Reuters

Foxconn aims to cut $2.9 billion from expenses in 2019: Bloomberg