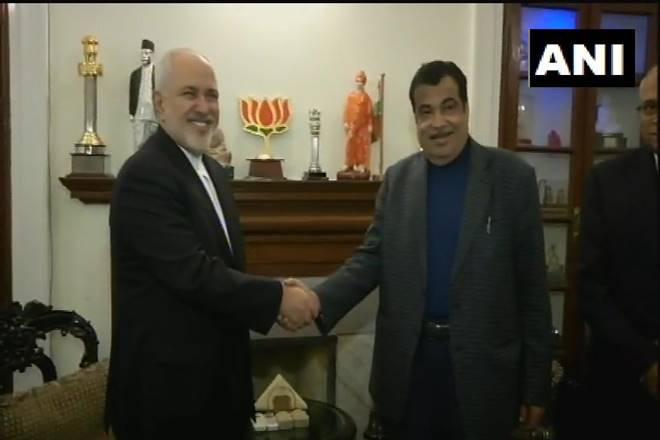 India is hopeful to fully operationalise the strategic Chabahar port in the Sistan-Balochistan province of Iran; and the government has allowed an Iranian bank to open a branch in Mumbai for related transactions, Union Minister Nitin Gadkari said Tuesday. Gadkari, after Iran’s Minister of Foreign Affairs Mohammad Javad Zarif called on him, said that the meeting was “fruitful” and both the sides could resolve several issues.

“Chabahar port is very important for us. We are working very hard on it… Some problems were there, but the Iranian government and their minister… are also in the process to resolve all the issues as early as possible. I am confident that we will be in a position to start full function of Chabahar Port at the earliest,” Gadkari said.

The Chabahar port in the Sistan-Balochistan province in the energy-rich nation’s southern coast is easily accessible from India’s western coast and is increasingly seen as a counter to Pakistan’s Gwadar port located at distance of around 80 km from Chabahar.

Zarif said, “We are very happy that both UCO Bank from India and Pasargad Bank from Iran are getting started with the business.”

The two banks will facilitate transactions relating to operation of berths at Chabahar port. Shipping and Road Transport and Highways Minister Gadkari said the Reserve Bank of India (RBI) has given all clearances to an Iranian bank which to open a branch within the next three months. “The government of India has given permission to an Iranian bank to open its branch in Mumbai. It is going to open within three months, and will be used for transactions (related to Chabahar port),” Gadkari said.

India has placed USD 85 million machinery order for Chabahar, he said. He said India has already taken over partial operations at Chabahar, and the first ship from Brazil has already been received at the Iranian port.

This is the first time India will be operating a port outside its territory.

The government of India took over the operations of a part of Shahid Beheshti Port, Chabahar, in Iran during the Chabahar Trilateral Agreement meeting held there on December 24, 2018. The heads of Indian, Iranian and Afghanistan delegations had jointly inaugurated the office of the Indian SPV – India Ports Global Chabahar Free Zone (IPGCFZ) at Chabahar.

Commercial operations began at IPGCFZ with the arrival of a vessel, a Cyprus registered bulk carrier that arrived at Chabahar with 72,458 MT of corn cargo.

The vessel MV Macheras berthed at the terminal at 0130 hrs on December 30, 2018, and IPGCFZ carried out its first cargo operation by discharging the imported cargo (ex-Brazil) using pneumatic un-loaders.

Gadkari said the Iranian Minister has given many proposals including those on a barter system between the two nations. “They need steel, particularly rail steel and locomotive engines in large quantities, and they are ready to supply urea,” he stated. India can provide steel rails to Iran and the Persian gulf nation can provide urea to India, he added.

“For railway line, IRCON has to work. We have got proposal for locomotive engines …,” the minister added.

Iraninan Minister Zarif said, “We had very good discussions on both Chabahar as well as other areas of cooperation between Iran and India. The two countries complement each other and we can cooperate in whole range of areas… We hope that in spite of the illegal US sanctions, Iran and India can cooperate further for the benefit of the people of the two countries and for the region.”

India started interacting with Iran on Chabahar Port around 2003, but a major push was received in the second half of 2014, resulting in the signing of a memorandum of understanding (MoU) between the two countries for the development of Chabahar Port in May 2015.

This MoU translated into a formal ten-year contract for equipping and operating the Chabahar port, which was executed on May 23, 2016, during Prime Minister Narendra Modi’s visit to Tehran.

On account of challenges in activation of the said contract, the foundation of an interim period contract was laid during the visit of Hassan Rouhani, President of Islamic Republic of Iran to New Delhi in February 2018. Resultant was a formal short-term contract between the two sides that was signed on May 6, 2018.

The Chabahar port is being considered as a gateway to golden opportunities for trade by India, Iran and Afghanistan with central Asian countries, besides ramping up trade among the three countries in the wake of Pakistan denying transit access to New Delhi.

Under the agreement signed between India and Iran earlier, India is to equip and operate two berths in Chabahar port Phase-I with capital investment of USD 85.21 million and annual revenue expenditure of USD 22.95 million on a 10-year lease.

Meet with RBI: Banks want to keep NPAs out of court

Indonesia stocks lower at close of trade; IDX Composite Index down 0.24% By Investing.com

Nissan CEO calls on Renault to listen to detail of Ghosn...