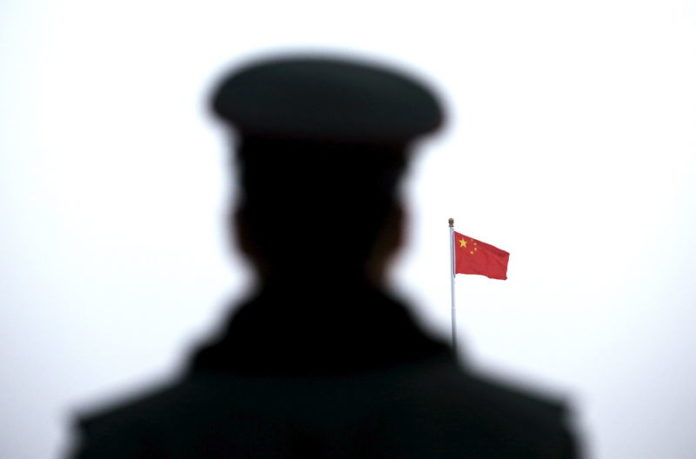 © Reuters. A paramilitary policeman watches a flag-raising ceremony at Tiananmen Square ahead of the opening session of the National People’s Congress in Beijing, China

By Sumeet Chatterjee and Clare Jim

HONG KONG (Reuters) – Several global banks including Citigroup (N:) and Standard Chartered (L:) have asked their private banking staff to postpone or reconsider travel to China after authorities there prevented a UBS (S:) banker from leaving the country, sources said.

The Singapore-based UBS banker, who is a client relationship manager in the Swiss bank’s wealth management unit, still has her passport, but was last week asked to delay her departure from Beijing and remain in China to meet with local authority officials this week. Her identity was not known.

The purpose of the meeting with Chinese authorities is not clear. UBS has declined to comment on the matter. However, the uncertainty has led the Swiss bank, and now several of its rivals, to require their private banking staff carefully consider trips to China, the sources said.

Their caution highlights the risks involved for the global private banks in pursuing what is arguably the biggest opportunity worldwide in the wealth management business.

China is the biggest growth driver of the wealth industry in Asia with its large and growing pool of millionaires and billionaires spawned by the country’s booming technology sector, making it a key battleground for global private banks.

But its financial sector is under sharp scrutiny as Beijing attempts to lower high debt levels in the economy and rein in the flow of capital outside the country to shore up the yuan, meaning there is very little room for error by industry players.

UBS is unusual in having an onshore wealth management business in China as well as its offshore operations, but almost all other banks advise wealthy Chinese individuals from offshore locations mainly in Hong Kong and Singapore.

Most offshore wealth managers travel frequently to China for informal meetings with clients, but they are not allowed to either solicit onshore business or market widely offshore investments to onshore clients.

Citi asked staff in its Asia Pacific private banking team, via a brief email on Sunday, to postpone all China travel, a source with direct knowledge of the matter told Reuters.

Bank of Singapore, the private banking arm of Singapore’s OCBC Bank (SI:), has told staff they can continue with their ongoing China trips, but should be cautious in future travel to the mainland, according to people with knowledge of the matter.

BNP, Citi, JPMorgan, Standard Chartered and Bank of Singapore declined to comment. All the sources declined to be named due to the sensitivity of the issue.

UBS is the largest wealth manager operating in Asia, with $383 billion of assets under management, according to Asian Private Banker magazine, ahead of Citi, Credit Suisse (S:), HSBC (L:) and Julius Baer (S:).

The number of high net-worth individuals – those with at least $1 million to invest – rose by 12 percent last year in Asia Pacific, exceeding growth rates anywhere else in the world, according to consultant CapGemini.

Volkswagen and Ford in talks on self-driving and electric vehicles: source