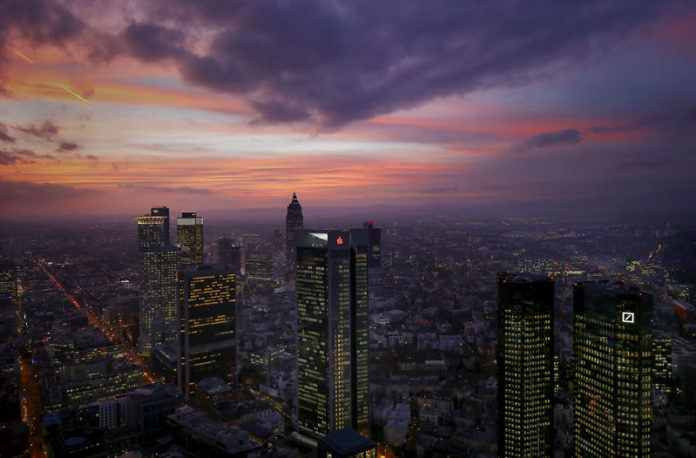 © Reuters. The skyline is photographed early evening in Frankfurt

BERLIN (Reuters) – Inflation in Germany’s most populous regions remained above the European Central Bank’s target in November, data showed on Thursday, supporting the central bank’s case for a gradual reversal of its monetary stimulus in the euro zone.

With price pressures building in the euro zone, the ECB last month confirmed its plan to end its 2.6 trillion euro ($3 trillion) bond-buying program at the end of this year and raise interest rates for the first time since 2011 sometime after next summer.

The ECB’s goal is to keep inflation in the euro zone close to, but just below, two percent a year.

This is the highest reading since October 2011.

In Bavaria, the second-most populous state, and in Baden-Wuerttemberg, the third, annual inflation was measured at 2.7 percent after 2.8 percent in the previous month.

The state inflation readings, which are not harmonized to compare with other euro zone countries, feed into nationwide data due at 1300 GMT.

A poll conducted before the release of the regional data suggested Germany’s harmonized consumer price inflation (HICP) rate would slow to 2.3 percent from 2.4 percent in October, which was the highest reading since February, 2012.

The euro zone will publish preliminary inflation data for November on Friday. The headline figure is expected to slow to 2 percent after 2.2 percent in October.

Greek debt crisis will not repeat itself in Italy, says Austria finance minister By...

‘Stop Brexit!’ – one man’s daily protest against UK-EU divorce By...