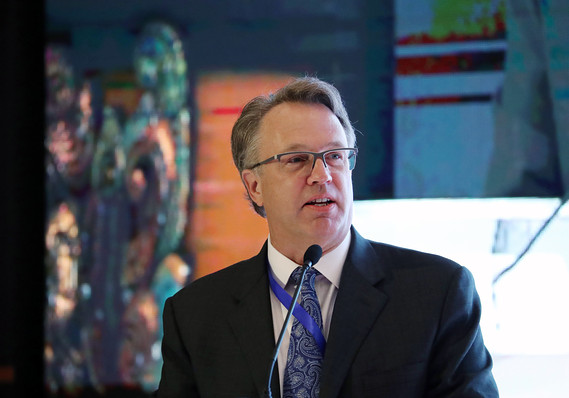 The U.S. economy will stay strong in 2019 and inflation will tick up above 2% and so the U.S. central bank should continue to raise interest rates gradually, New York Fed President John Williams said Tuesday.

“Given this outlook of strong growth, strong labor market and inflation near our goal and taking account all the various risks around the outlook, I do expect further gradual increases in interest rates will best sponsor a sustained economic expansion,” Williams said at a press briefing.

“It accurately represents where we are,” he said.

The New York Fed president said growth will slow in 2019, but only a bit, to a 2.5% annual rate from near 3% this year as the Trump tax cut will continue to provide a “tailwind” to activity.

Inflation will move only a little above the Fed’s 2% target, he said.

“Importantly I don’t see any sign of greater inflationary pressures on the horizon,” he said.

Williams is a member of Fed Chairman Jerome Powell’s inner-circle of advisors. He gets to vote at every interest-rate meeting. In keeping with remarks by Powell, Williams stressed that the Fed will evaluate incoming data to gauge the precise stance of policy.

Investors still see an 85% chance the Fed will raise interest rates by a quarter point in December, according the CME Group’s FedWatch tool, which derives projections from futures trades.

But the market has growing doubts about the health of the economy, seeing only one rate hike in 2019, well below the Fed’s latest projection in September of three more increases.


below 3% this week, the lowest level since early September.

Another sign of investor fears is a flattening yield curve, or the spread between short-dated

Williams said he is alert to signs that the economy may slow faster than he expects, but that his baseline forecast is “still very positive.”

“There are risks on the horizon,” he said.

Not all risks are on the downside, he noted, saying there was a “50%” chance inflation will pick up at a faster pace than he expects.

The Fed is in a good place to react “to whatever the economic news is,” he said.

Williams said his comments are consistent with Powell’s recent remark that the Fed’s policy rate was “just below” neutral.

Though lower on Tuesday, the Dow Jones Industrial Average


is about 4% stronger than it was before Powell’s speech.

Vietnam Says Google and Facebook May Have Year to Meet Cyber...

if no China trade deal possible, ‘I am a Tariff Man’...