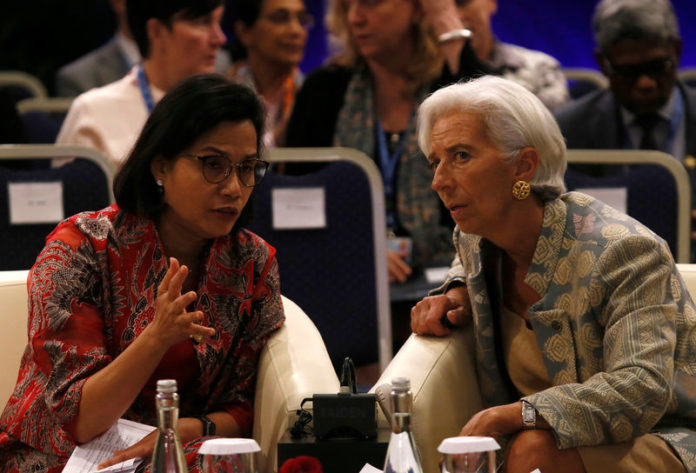 The International Monetary Fund-World Bank meetings wrapping up on Sunday gave central bankers and finance ministers from around the world a chance to meet face-to-face in Indonesia, whose rupiah currency hit a new 20-year low this week.

Poorer and populous emerging markets have been particularly vulnerable to the escalating U.S.-Sino tariff war and rate rises by the U.S. central bank. Investors dumped assets seen as riskier, sparking painful currency plunges that have punished countries from India to recession-hit South Africa, as well as triggering crises in Turkey and Argentina.

“We are all aware that the normalization of the monetary policy in the U.S., combined with their fiscal policy and trade policy … are all creating a systemic impact to the whole economy in the world,” Indonesian Finance Minister Sri Mulyani Indrawati said in an interview during the meetings in Bali.

The Federal Reserve’s nearly three-year-old tightening cycle has in part prompted a global shift in capital away from emerging markets and after three hikes this year, it foresees another December rise, three more next year, and one in 2020.

A senior Fed official in Bali said the rate rises were right for domestic policy and ensuring they were gradual and predictable was “the best solution” for minimizing unintended volatility in emerging markets.

In a bid to support the rupiah, Bank Indonesia has raised rates five times since mid-May and intervened regularly, but still the currency has lost nearly 11 percent this year, leaving it at the weakest levels since the 1998 Asian financial crisis.

Bank Indonesia Governor Perry Warjiyo said that the 150 basis point rate hikes since mid-May aimed to keep Indonesian assets attractive enough for foreigners to stay invested, but calibrating this in the current environment was hard.

Finance ministers for developing nations in the Group of 24 economies urged major economies to reform the global trading system, rather than discard it.

The G24 statement, issued on the sidelines of the Bali meetings, said all emerging markets were “adversely affected” by excessive capital flow volatility.

While many countries shared common fears, Indrawati said it was difficult to forge cooperation to counter the risks.

“It’s not really clear how the world is going to coordinate more effectively, especially when each country has their own domestic issues,” she said.

The Philippine peso has shed nearly 8 percent this year and its deputy central bank governor, Diwa Guinigundo, said the IMF and other global institutions should advise advanced economies on the potential negative consequences of their moves.

He said while it was good for policymakers to be ahead of the curve in tightening, they should take account of the growing clout of emerging markets. “It should also be emphasized that ASEAN+3 (China, Japan, Korea), we account for a good bulk of the world’s population and GDP.”

“EITHER ALL ARE WINNERS OR ALL ARE LOSERS”

IMF Managing Director Christine Lagarde urged members at the meeting to “de-escalate” trade tensions and work on fixing global trade rules. She also warned against adding currency to the trade conflict, saying this would hurt global growth as well as “innocent bystander” nations, including emerging markets that supply commodities to China.

Egyptian Finance Minister Mohamed Maait said policy makers in developed countries should understand that if their actions hurt other countries it would have knock-on effects.

“You need me. I am a market for you, I am an opportunity for you,” Maait told Reuters. “I don’t believe there will be a winner and a loser. Either all are winners or all are losers.”

Indeed, market ructions have now cascaded through to developed markets with Wall Street seeing a six session slide until a rebound on Friday, amid fears over the trade war between China and the United States.

However, other than having effective monetary policies, developing markets can do little to cope with the impact of rate hikes and trade battles, said Jacob Frenkel, chairman of JPMorgan Chase (NYSE:) International.

“When elephants fight, the grass suffers.”