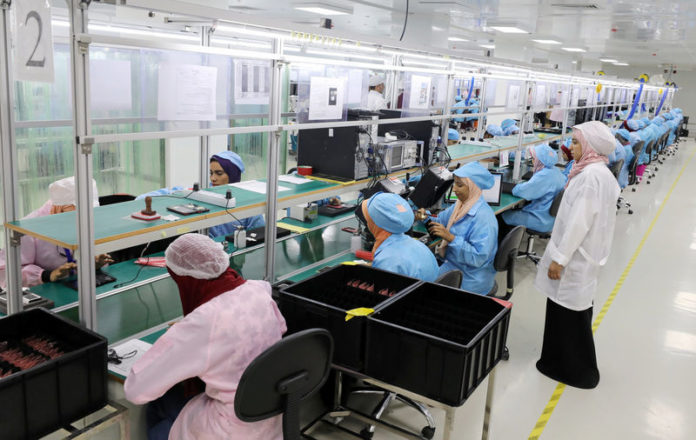 © Reuters. Women work on a production line at the mobile phone factory in Assuit

CAIRO (Reuters) – Egypt’s first smartphone maker is looking to enter the broader African market by the end of 2018 or early 2019 as it seeks to boost exports, its sales director said.

“It’s a promising market and there’s much less competition than in the Gulf,” Ali said, noting big demand for affordable phones in Africa. He said he mostly expected to sell smartphones in the $50 to $60 price range to African customers outside Egypt.

SICO, which was set up last year with capital of 150 million Egyptian pounds ($8.4 million), sells phones under the brand name Nile X and has said it uses a Chinese design of 3G/4G U.S. technology.

Private investors hold 80 percent of the company and the remaining 20 percent is held by Egypt’s Ministry of Communication.

In 2019 the company aims to export 40 percent of its production and keep 60 percent local, Ali said. It also wants to expand its market share in Egypt from 12 percent to 15 percent in 2019, he said.

He said it was too early to set a sales target for exports to African countries, but he expected to export more to customers in Africa than in the Gulf next year.

“We are still entering the market and talking to people,” he said. “We are working with several operators and hoping that [the phones] will be available at their branches at the end of 2018 or early 2019.”

The smartphone maker plans to introduce new phones next year, offering a total of 14 products, he said. SICO currently offers six products, including smartphones and a tablet, he said.

Facebook’s Sandberg cites need to do more after reports of Russia...