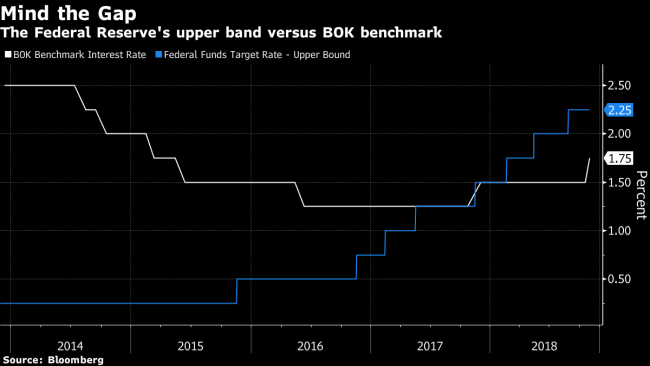 (Bloomberg) — The Bank of Korea raised its key interest rate for the first time in a year, choosing to focus on the nation’s record household debt and a widening gap between Korean and U.S. rates.

The decision on Friday to increase the seven-day repurchase rate to 1.75 percent from 1.5 percent was forecast by 14 of 18 economists surveyed by Bloomberg. The remaining four had predicted no change.

The BOK joins central banks in Indonesia and the Philippines in raising rates in recent weeks as the Federal Reserve’s rate-hike cycle weighs on Asian currencies and draws capital away from the region.

“A rate hike will inevitably be negative for domestic demand but suggests the BOK opted for a short-term cost in exchange for the long-term benefit of financial stability,” Kwon Young-sun, an economist for Nomura International Ltd., said before the rate decision was announced.

Since raising the rate from a record low 1.25 percent in November last year, Lee has repeatedly said policy accommodation would need to be reduced further to address growing financial imbalances. Yet constrained economic growth and subdued inflation — and more recently, an escalating U.S.-China trade war — gave policy makers plenty of cause to wait.

Yet Friday’s rate hike may be the last for a long while. Most economists forecast rates to still be at 1.75 percent in the third quarter of next year, given growth and inflation rates. Kwon said he expects the BOK to stand pat throughout 2019 and start cutting rates in 2020.

Lee stressed after the BOK’s October policy meeting that price stability and caring for the economy were the BOK’s primary objectives, saying it would raise rates only if it didn’t put significant pressure on growth and inflation. Korea’s economy has been losing steam, with emerging market turmoil and a slowdown in hiring at home adding to reasons for caution.

Inflation in October ticked up to 2 percent, matching the BOK’s target.