Home Finance 3 ways to buy happiness (instead of a $1.6 billion lottery ticket) 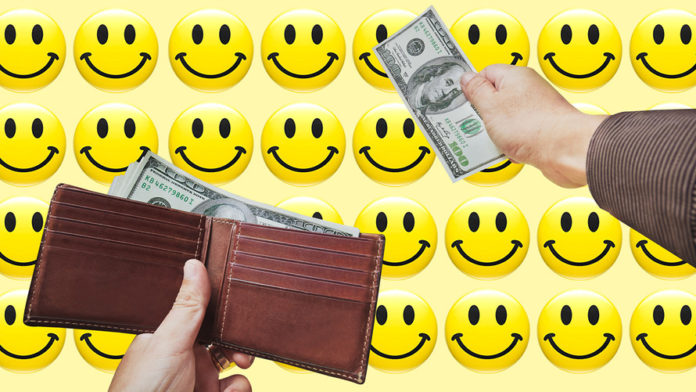 If I ever have trouble sleeping at night, I close my eyes and think of Clash, my dog who was named after the rock band.

Giving him a home was the best decision my family ever made. He had the proud, handsome face of a Jack Russell with the wobbly behind of a Dachshund. He only ever wanted to chase a tennis ball. He swallowed the ball, and it cost hundreds of dollars to have it removed. But he was worth every dollar.

Why? Happiness is like a game of pass the parcel — and your spending should be, too. Indeed, research shows that spending money on others — be they furry friends or human friends — rather than on yourself will help you find lasting happiness. So rather than dream about the $1.6 billion Mega Millions lottery jackpot, why not use your hard-earned money to lead a more meaningful and satisfying life.

1. Happiness is a warm puppy (or sandy beach)

A pet will cost you $1,270 to own in the first year alone, according to the animal-welfare nonprofit American Society for the Prevention of Cruelty to Animals, but it’s money well spent: Pets provide you with social support that’s critical for psychological and physical well-being, studies found.

A 2011 study in the Journal of Personality and Social Psychology showed that pet owners had greater self-esteem and got more exercise than non-pet owners, and were less likely to shy away from relationships for fear of being hurt.

In the first part of that study, pet owners had greater self-esteem and more exercise — and also experienced improved conscientiousness and less fearful attachment, a psychological term that describes the desire to stay away from relationships for fear of being hurt. “The support that pets provided complemented rather than competed with human sources,” they found. Finally, pet owners “demonstrated the ability of pets to stave off negativity caused by social rejection.”

Happiness is, indeed, a warm puppy. That could be why some people feed their dogs avocado and kale. And so I’m searching for another dog to adopt. I have been scrolling through PetFinder and Animal Haven for rescued animals like it’s Doggy Tinder. Sadly, Howell, a stoic Scottish Terrier, went to his forever home — that is, he was adopted — an hour before I called the pound. (Oddly, a similar thing kept happening on OKCupid too.)

It’s hard not to feel gratitude every time an animal looks at your with unconditional love (or eyes pleading for a bite of that sandwich you’re holding). A new study published in the peer-reviewed Journal of Positive Psychology suggests that keeping a gratitude journal rather than an activity journal helps people feel more grateful for what they have.

The study involving 870 adolescents might help parents raise less materialistic children. “It is possible to reduce materialism among young consumers,” researcher Lan Nguyen Chaplin, associate professor of marketing at the University of Illinois at Chicago and co-author of the study, wrote. The answer? “Fostering gratitude for the things and people in their lives.”

The researchers said gratitude is not a nebulous concept or mere state of mind, but should be part of a regular practice. They suggest daily gratitude reflection around the dinner table, having your kids make posters stating what they are grateful for, or keeping a ‘gratitude jar’ where members of your family write down something they are thankful for.

2. Even spending $5 on others improves happiness

The struggling middle class is giving less to charity. While our instinct may be to pile up money in our savings accounts to ensure our future happiness, spare some to help others. Spending money on other people works more magic — or “predicts greater happiness,” to use the academic term — than spending it on oneself.

Participants who were randomly assigned to spend money on others experienced greater happiness than those assigned to spend money on themselves, researchers at University of British Columbia and Harvard Business School concluded in a 2008 study published in the academic journal Science. But very minor alterations in spending allocations — as little as $5 — may be sufficient to produce non-trivial gains in happiness on a given day,” it found.

There are many ways to do this. Among them: An automatic payment every month to your favorite charity. Charitable giving is tax-deductible, but makes you feel healthier and happier too. “A growing body of literature documents that giving to others reduces stress and strengthens the immune system, which results in better health and longer life expectancy,” Baris Yörük, an associate professor of economics at the University at Albany-SUNY and author of another 2013 study in the Journal of Economic Psychology, concluded.

”Give as if you were taking,” Hisham Matar, the Pultizer Prize-winning author of the memoir “The Return,” said his late father advised him. Russ Johnson, a retired manufacturing executive based in Louisville, Ky., takes that message to heart. He doesn’t give to charity, but he is a champion tipper. After a conversation with a golfing buddy 10 years ago, he decided to stop donating to charities and start tipping 50% of the bill instead. You can also keep your eyes and ears open for ways to give every time you walk outside your home.

3. Invest in experiences and memories over stuff

Another golden rule? Spending on possessions may fill your closet and pantry, but spending on intangibles fills your soul. A great live performance is the first thing I know I spend money on without regret. It makes me happy.

I still have gratitude (the kind they try to jimmy out of you at Buddhist retreats) that I caught Kathryn Hunter’s frail, broken portrayal of King Lear — 20 years before Glenda Jackson’s recent West End performance in the same role — at London’s Leicester Haymarket theater in 1997.

Add to that Siân Phillips playing Marlene Dietrich in London’s Lyric Theatre on Shaftesbury Avenue that same year, or Annie Baker’s “Circle, Mirror, Transformation” at Playwrights Horizons in 2010 about a group of adults in an acting class. And Liza Minnelli singing “New York, New York” at the Palace in 2008. She was in fine fettle. It was worth every penny and I still think about it to this day. (One significant downside: I had to chase a lot of turkeys to find those performances.)

Also see: Stuff or experiences? ‘Hamilton’ and my Vitamix blender have the answer

There’s a scientific (as well as an artistic) explanation for this kind of cultural enrichment that lasts decades, perhaps even a lifetime. Ryan Howell (no relation the aforementioned Howell), an associate professor of psychology at San Francisco State University, has spent a large portion of his career studying happiness and purchases, and writes a blog on the subject for Psychology Today.

His own studies, and many others, have shown that spending money on experiences rather than stuff can lead to a more lasting happiness. Revisiting the characters in my favorite series of books, the Mapp and Lucia series by E.F. Benson, makes me happy. I get to travel back to Britain between the wars. It’s hard to grow tired of these beautiful memories.

If you really need a Cinemascope-style LED television screen and Louis Vuitton shoes, don’t let me stop you. Certain people have more difficulty being happy. An hour a week on a psychologist’s sofa might not hurt in that case and would fit into Tatzel’s point on experiences.

“People who had greater materialistic values were more likely to buy experiential items for extrinsic reasons, such as showing off or impressing others,” Howell and his colleagues concluded from a 2013 laboratory study of 100 people. “This suggests that materialistic individuals may not feel happiness from experiences.”

Pets, people, plays and — finally — spend your money on planes, or rather the places they can take you. When I’m on my deathbed, I will never regret the time I traveled to a distant island paradise and floated in warm sea water as if I were in a movie, or a dream. I lay in a tent in Kruger National Park in South Africa in the dead of night listening to the orchestra of sounds from the wild.

Peering into the remains of The Sarajevo Tunnel that was used to transport food to the residents during the siege during the Bosnian War reminds me never to take a civilized society free of war for granted. Check out this guy who quit his job and spent a year traveling the world. He produced a five-minute video of his trip.

Prolonged happiness can be gleaned from “experiential purchases” or “intangible experiences,” according to a recent book — “Consumption and Well-Being in the Material World” — by Miriam Tatzel, professor at the Empire State College in Nanuet, N.Y. Published in 2014, it analyzes decades of research on materialism and says dollars spent on intangible experiences such as travel leads to more happiness than splurging on tangible goods like jewelry, clothes, furniture or even the most sought-after electronic gadgets.

Sarah Ferguson Talks About ‘Boyfriends,’ But Admits Prince Andrew Is Her ‘Soulmate’

Twitter CEO kicks up storm in India, offending some Hindus