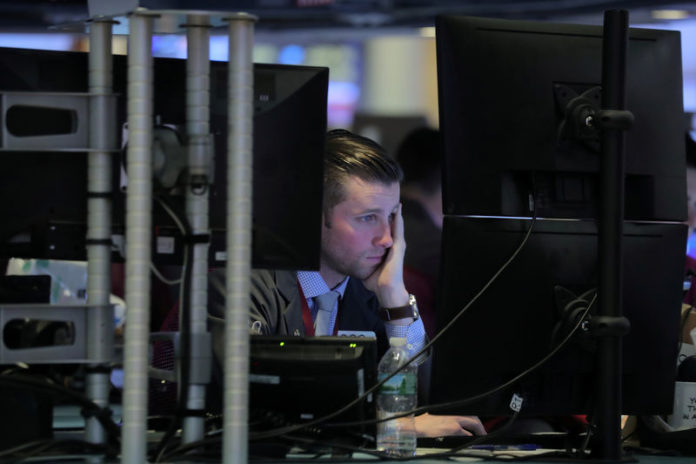 © Reuters. A trader works on the floor at the NYSE in New York

“The near-term guidance Treasuries are taking are from broader risk assets, so they are certainly paying attention to the fall in equities globally,” said Jon Hill, U.S. rates strategist at BMO Capital Markets in New York.

Analysts attributed the rise off the yield lows to investors closing trades with liquidity expected to decline before Thursday’s Thanksgiving holiday.

The 10-year yields have declined from 3.25 percent on Nov. 7 and are at the low end of the range they have traded in since the beginning of October.

The bond market will be closed on Thursday and will close early on Friday.

Fears about slowing global growth have also boosted demand for U.S. government bonds as investors contemplate how a slowdown will impact further rate increases by the U.S. central bank.

“The background for a lot of what’s going on is a reassessment of the Fed’s path of policy as it relates to the growing concern about global growth as well as a potential recession going into 2020 and 2021,” Hill said.

Two-year note yields (), which are highly sensitive to interest rates, have fallen to 2.791 percent from 2.977 percent on Nov. 8, and are trading near their lowest levels since Sept. 18.

Richard Clarida, the Fed’s newly appointed vice chair, on Friday noted there was “some evidence of global slowing,” adding “that’s something that is going to be relevant as I think about the outlook for the U.S. economy.”

Fed Chairman Jerome Powell said last Wednesday that softness in housing and high levels of corporate debt had caught the Federal Reserve’s eye, even as a “really strong” U.S. economy was likely to continue growing.

New York Fed President John Williams (NYSE:) on Monday said that the U.S. central bank was pushing ahead with gradual rate-hike plans next month as it marches toward a more normal policy stance.

India shines in ease of doing business, but this is where it lags behind