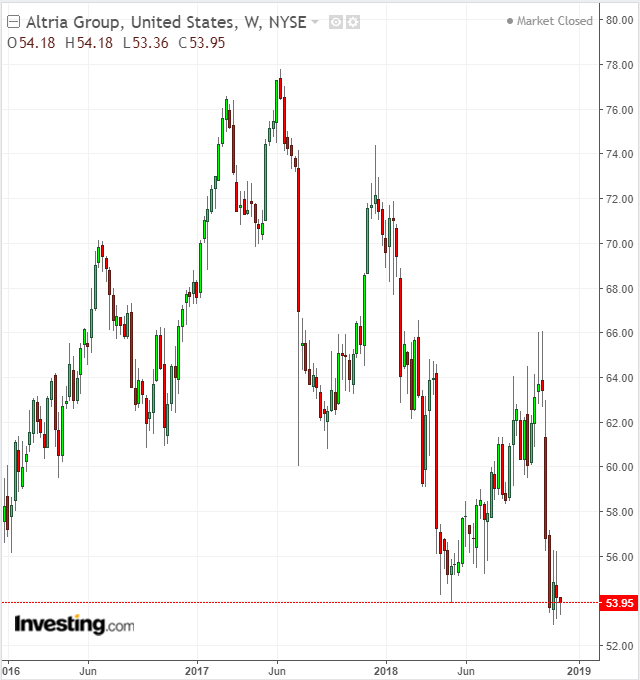 After watching its market cap steadily erode over the past year and a half, Altria Group (NYSE:), the owner of Marlboro cigarettes among other globally recognized tobacco brands, is at long last fighting back.

Last week, the parent company of Philip Morris USA, Skoal and Nat Sherman announced that it was paying $1.8 billion for a 45% stake in Canadian cannabis company Cronos Group (NASDAQ:). The deal also allows the cigarette maker to acquire another 10% of the Toronto-based Cronos, a move that would give Altria a controlling stake in the pot producer in its home country, which in October became the first developed nation to legalize marijuana for adult recreational use.

Even before its entry into the marijuana market, Altria was reported to be in talks for a minority stake in an e-cigarette startup, Juul Labs Inc. Both moves appear to be part of a larger diversification strategy for this traditional tobacco company, a way to revive growth at a time when cigarette sales are declining and nicotine consumers are increasingly looking for other options in lieu of burning tobacco.

This aggressive, acquisition-led growth strategy comes on the heels of steep declines in Altria shares, which closed yesterday at $53.95. Since the summer of 2017, Altria has lost more than a quarter of its market capitalization, as technological innovation, new government regulations and declining adult consumption of traditional tobacco products created doubts about the company’s future growth potential.

Nearly 38 million, or 15.5%, of American adults smoked traditional cigarettes in 2016, down from 20.9% in 2005, according to the US’s Centers for Disease Control and Prevention. This shift in tobacco consumption has also been bad news for long-time Altria investors, who for years have loved the stock for its recession-proof status and attractive dividends.

Indeed, during the past decade, Altria shares have outperformed the benchmark by a wide margin, providing stakeholders with annualized returns of about 20%, through January 2018. However, since the start of the year that advantage has been shrinking rapidly, forcing management to seek new avenues for growth.

In our view, Altria’s entry into the fast growing cannabis market and its potential stake in Juul, which accounted for about three-quarters of the US e-cigarette market, are two smart moves that will position the company to capture significant positions in each of these fast growing markets.

Cronos Group, currently Canada’s number 6 pot producer, with its footprint in many countries and increasing production capabilities, has everything needed to become a strong global player in the marijuana space. The company is on track to grow 117,000 kilograms of cannabis per year, after the producer secured key supply agreements for the recreational marijuana market in Canada.

In addition, Cronos has partnered with pharmaceutical supplier Pohl-Boskamp to distribute medical cannabis products in Germany. It has also finalized another medical marijuana supply agreement in Poland. As well, the company has joint ventures in Australia, Israel, and Latin America.

Juul could prove to be a good investment for Altria too, as the start-up seeks to expand its e-cigarette business beyond the US where it’s facing significant regulatory hurdles. Juul products are sold in Canada, the UK, Israel and Russia; the company has expansion plans in Europe and Asia as well.

Despite the recent positive headlines, investors have generally given Altria’s stock the cold shoulder. The primary reason: the FDA’s announcement last month that in addition to restricting e-cigarette sales it would seek to ban menthol cigarettes. Menthols represent about 20% of Altria’s cigarette sales.

For the past few years, the negative headwinds hitting the tobacco industry have been accelerating. Not surprising then that it hasn’t been a good time to invest in cigarette producers. But if you’re looking for regular income and long-term value from this sector, we believe Altria is the best option.

The company is fortifying its diversified business model which will help maintain . With its Its 10% stake in Anheuser-Busch InBev (NYSE:), the largest beer producer in the world, and a now sizeable position in the accelerating marijuana industry, Altria is a good long-term bet, especially when its dividend yield, at 6%, is at a multiyear high.