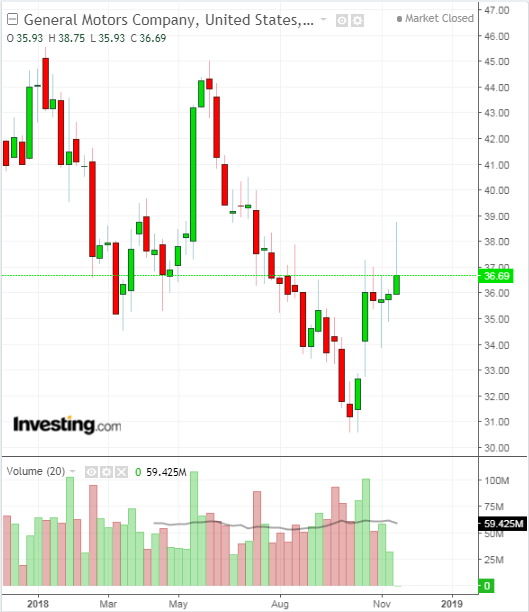 General Motors (NYSE:) is betting big on electric and driverless cars for its future growth. To prepare for that imminent shift in consumer preferences, the company announced on November 26 that it plans to cut more than 14,000 jobs and close seven factories worldwide by the end of next year.

This massive restructuring galvanized the automaker’s shares, sending them higher by about 5% the day the news broke, reducing the stock’s year-to-date losses to 10%. The investor reaction to the company’s new direction, however, wasn’t a big surprise.

GM’s move, which would abandon some of its small car lines in favor of higher-margin trucks, mirrors the rest of Detroit’s auto manufacturers all of whom are operating in a market where demand for small cars is rapidly declining. Plant closures and job cuts are meant to free up cash for continuing investment in electric and autonomous-driving vehicles.

On its face, GM’s latest restructuring looks a step in the right direction. But for long-term investors who already own shares of the Detroit automaker, the biggest question is whether to remain loyal to an equity that has delivered little since the company emerged from bankruptcy in 2010. Now that GM is embarking on a new journey to transform itself completely, does it make sense to bet on the turnaround?

In our view, there are plenty of risks that GM is going to be facing. The headwinds are both cyclical and secular in nature.

In the near-term, US-China tariffs will soon begin to pinch GM . US auto sales peaked in 2016 and have been falling ever since. This metric could come down yet further if consumer demand slows on rising interest rates. In the third-quarter that ended on September 30, the largest US car maker posted a 15% drop in deliveries in China.

Aside from these macro risks, GM is also facing disrupters such as Tesla (NASDAQ:) and Alphabet’s (NASDAQ:) driverless car unit, Waymo, which started developing autonomous car technology almost a decade ago and is thus much ahead in the game.

Indeed, Waymo is planning to launch the world’s first commercial driverless car service next month. Bloomberg reported on November 13, it would be tested via a small group of people in Phoenix.

The ascent of the sharing economy means potentially fewer cars on the road. As these trends accelerate over the next few years, they could further depress the desire for car ownership, reducing drastically the size of the market and the market share of individual car makers.

Undoubtedly GM’s new bet on both electric and driverless cars will keep the company in the race. But the success of these programs isn’t guaranteed. GM is competing with some deep-pocketed rivals, such as Google. For now, the revenue that drives GM’s hefty dividend—which currently yields 4.04%—is coming from gas-guzzling SUVs and trucks.

Amid these negative developments, we believe it will be pretty tough for GM to repeat the earning-beat it accomplished last month. Over the past several years, this has been a company with revenues stuck between $140 and $150 billion. And we see a similar trajectory going forward.

In our view, the rally in GM’s stock since its better-than-expected third-quarter earnings report has run its course. After a 23% surge since late October, GM shares are headed back to $30 in the short-run, given a worsening macro environment. GM’s stock is a good short-term trade, suitable for buying low and selling high-type investors.

Another LIC bailout in offing? IL&FS will not be allowed to collapse, all options...

Tokyo exchange says some 40 brokerages affected by connection glitch By...

Austal says hacker steals some data at its Australia business By...