Home Banking Why low unemployment is a red flag for stocks 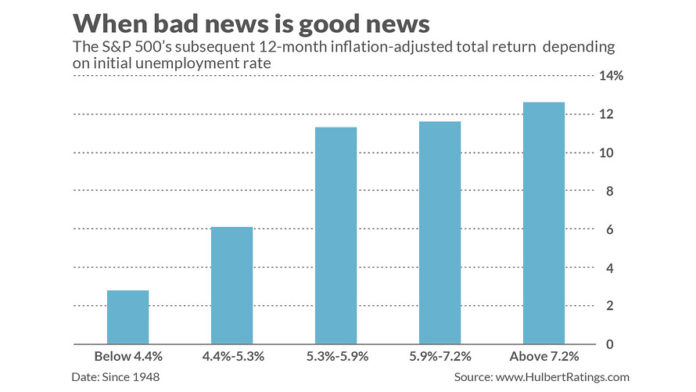 The bull market on Wall Street is vulnerable for a most-unlikely reason: U.S. unemployment is particularly low.

Keep this history in mind as anticipation builds over the next two weeks for the next monthly report of the unemployment rate, due Friday, Nov. 2. The consensus expectation is that unemployment will stay at its current 3.7% rate — the lowest in 49 years.

That we should even think of bemoaning this as undesirable brings to mind a line often attributed to Mae West: “When I’m good I’m not bad, but when I’m bad I’m wonderful.”


inflation-adjusted and dividend-adjusted return over the subsequent 12 months. The lowest average returns came following the 20% of months with the lowest unemployment rate. The cutoff for being in that lowest 20% was 4.4%, well-above the current rate of 3.7%.

In contrast, the highest average stock returns came following the 20% of months with the highest unemployment rates. Furthermore, this pattern held up for each of the intervening quintiles as well, as you can see from the accompanying chart. The contrast plotted in the chart is significant at the 95% confidence level often used by statisticians to determine if a pattern is genuine.

Why would the stock market perform more poorly when the unemployment rate is lower? The primary reason is that low unemployment puts pressure on the Federal Reserve to raise interest rates. By the same token, high unemployment leads the Fed to stimulate the economy.

This puts into perspective the White House’s recent jawboning against the Federal Reserve’s pace of interest rate increases. The historical data suggest that investors are on shaky ground celebrating the bull market’s longevity and that unemployment is at historic lows.

Needless to say, this historical pattern doesn’t guarantee that the stock market will suffer over the next 12 months. For example, it’s been a year-and-a-half since the unemployment rate fell into the lowest quintile of historical readings (below 4.4%), and since then the S&P 500 (in inflation-adjusted and dividend-adjusted terms) has risen at close to a 10% annualized pace. That’s better than the lowest quintile’s historical average of 2.8%.

Still, given the history, and given the consensus forecast that unemployment will stay at its current low rate in coming months, or even decline further, it’s easy to see why the White House is worried — and why perhaps we should be too.

For more information, including descriptions of the Hulbert Sentiment Indices, go to The Hulbert Financial Digest or email mark@hulbertratings.com.

SBI to buy assets worth Rs 45,000cr from NBFCs to resolve liquidity crisis