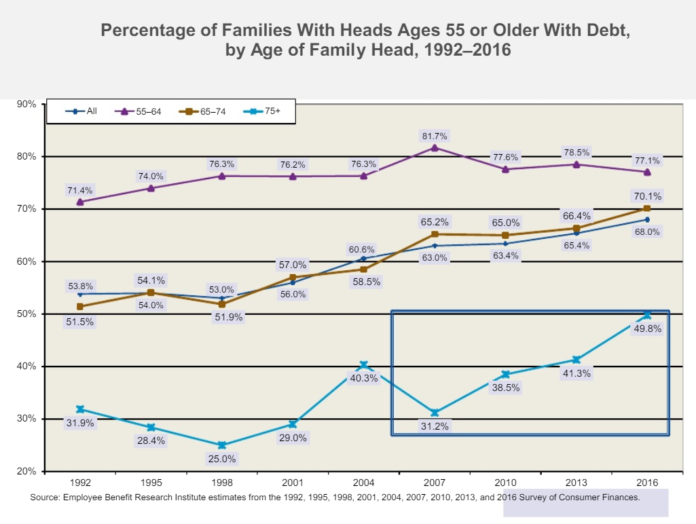 Grandma and grandpa may love to spoil the grandkids every Christmas, but they might want to hold off on spending too much on presents this holiday season.

Seniors are racking up debt and filing for bankruptcy more than ever before. Older Americans are facing higher rates of mortgage debt, and increasingly paying for basic and medical expenses on credit cards. “Anything that they can’t pay for out of their income, they will charge if they can,” said Lori Trawinski, director of banking and finance at AARP Public Policy Institute. “Around the holiday season, sometimes you see a spike because people want to participate in giving gifts and it’s hard not to do that if you have access to credit.”

That impulse could spell trouble. While they are spending more on credit cards and paying for other obligations, seniors typically don’t see an influx of income in their old age, because most have stopped working and collecting regular paychecks. Even if they’re lucky enough to have substantial retirement savings, many older Americans live on fixed budgets, and see a drop in income after retiring, she said.

See: Raising grandchildren? Here’s something that may help

There has been more than a two-fold increase in Americans 65 and older filing for bankruptcy since the 1990s, and a five-fold increase of seniors in the bankruptcy system, according to a 2018 report called “Graying of U.S. Bankruptcy: Fallout from Life in a Risk Society.” 4 Seniors enter bankruptcy with an average negative wealth of about $17,000.

Seniors’ debt has primarily been housing debt, though in recent years seniors have faced issues with other debt, said Craig Copeland, senior research associate at Employee Benefits Research Institute. Mortgage debt has been increasing, in that the percentage of families carrying debt is rising and the amount of debt they have is increasing too, Trawinski said.

Also see: 10 life-defining lessons I learned from my grandparents

Some older Americans are also paying for their children or grandchildren’s education, Trawinski said. As a result, many have student loan debt.

And when seniors haven’t saved enough for retirement, they sometimes rely on credit cards to cover expenses. Medical costs have also become an expensive burden on seniors, which rise as a person ages. Health care will cost $280,000 in retirement for a couple 65 years old retiring in 2018, not including long-term health care — and that figure is expected to continue increasing for the foreseeable future.

Still, many grandparents can’t resist spending on their grandchildren. Grandparents spend an average of $2,500 every year on grandchildren, mostly through buying presents, followed by paying for vacations and funding their school and college tuition. Grandparents now account for about $7 billion of America’s $28 billion toy industry, according to the consumer analytics firm NPD. While parents still spend more on toys, in the past 12 months, grandparents’ toy-spending growth has outpaced just about every other consumer group in the market, NPD said.

Seniors in too much debt have a few options, according to National Debt Relief, a company that works with people to lower or pay off debt (for a fee). Seniors could: ask family for help, either monetarily or in keeping them accountable to sticking to a budget; refinance an existing home mortgage, though that may not be suitable for seniors who are close to paying off their mortgage; apply for a reverse mortgage (also not ideal for all individuals); take out a home equity line of credit; sell assets (such as valuable collectibles); or work with companies that negotiate payments with credit card companies (like National Debt Relief says it does). “To the extent you can avoid charging things, you’re better off,” Trawinski said. “Unfortunately, some people do not have that option.”

Italy’s Conte sees no scope to change 2019 budget plan By...

J&J knew for decades that asbestos lurked in its Baby Powder...