Home Finance Which markets are closed on Thanksgiving? 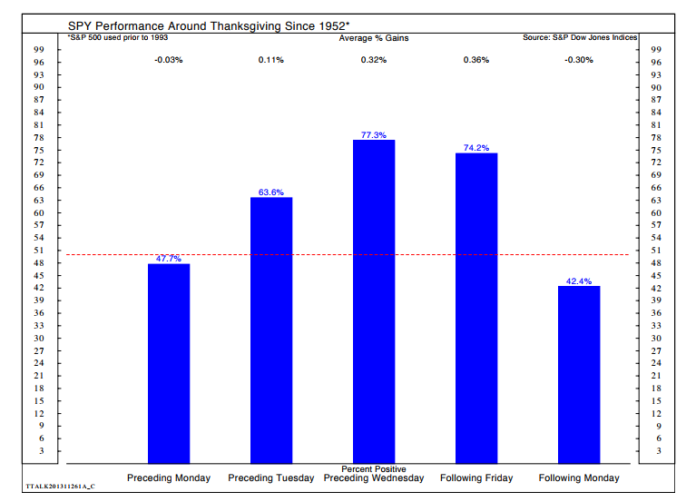 U.S. financial markets are closed on Thursday for the Thanksgiving Day holiday. But the market has another reason to be thankful on Friday.

Since 1992, stock exchanges have adhered to an abbreviated trading schedule the Friday after Thanksgiving in the U.S. The key driver for the abbreviated session is the ghost-town trading atmosphere that typically ensues the day after all the cranberry sauce and stuffing have been devoured.

The New York Stock Exchange and the Nasdaq will close at 1 p.m. Eastern time on Friday.

Overall, trading activity on the Wednesday before Thanksgiving and the Friday afterward are usually a fraction of what it is during normal, non-holiday trading periods. Here’s a look at the average trading volumes since 2010 on the day before and after Turkey day (as well as July 4 and Christmas Eve), per Dow Jones Market Data:

Total volume around Thanksgiving, Christmas and Fourth of July

The dearth of volume around the holiday makes sense, given that Thanksgiving is the busiest travel day of the year, according to the U.S. Department of Transportation.

The major U.S. exchange operators — the NYSE, American Stock Exchange, and Nasdaq — initially called for a 2 p.m. Eastern close for the Friday after Thanksgiving in 1992, two hours earlier than the normal 4 p.m. closing bell. But the following year, exchanges opted to shutter markets three hours earlier, at 1 p.m.

Read: A brief history of trading hours on Wall Street

The day before Independence Day on July 4 and Christmas Eve, as well as the day after Christmas, should it fall on a weekday, also see 1 p.m. closes.

Unfortunately for the bond traders, who also are off on Thanksgiving, they only have a 2 p.m. early close on Friday, as recommended by the Securities Industry and Financial Markets Association.

However, perhaps markets could use a respite after an fairly ugly start for equities. On Monday, the S&P 500 index


declined 1.7%, marking their worst Monday start to a Thanksgiving week since 2011. The Nasdaq Composite Index

The Nasdaq and S&P 500 have finished higher on the week of Thanksgiving since 2012.

According to Ned Davis Research, the Wednesday and Friday of Thanksgiving week have been positive 75% of the time, with average gains of about 0.3%. However, bulls have struggled to maintain that optimism on the Monday after Thanksgiving, which has been positive only 42% of the time with an average loss of 0.3% (see chart below):

Given the current momentum playing out in the market now, stocks aren’t likely to see much of an uptrend this Thanksgiving, though worries about trade and a sluggish economic expansion abroad has fueled appetite in the 10-year Treasury notes

Colombia stocks higher at close of trade; COLCAP up 1.35% By Investing.com

China yuan to crack 7 per dollar in six months on...

Fed Lowers The Boom On Wells Fargo After Years Of Grotesque...