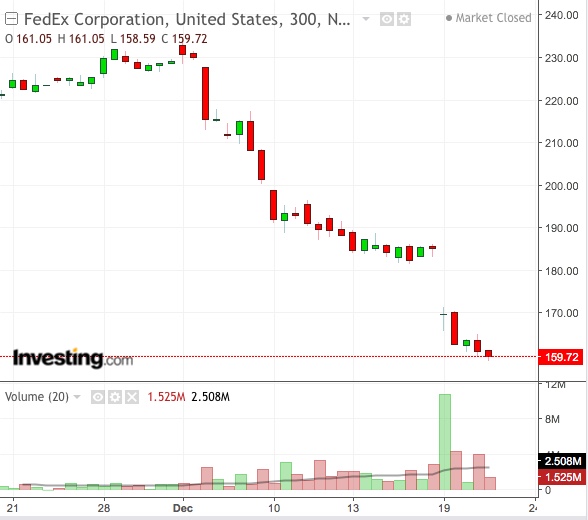 While announcing its fiscal second-quarter this week, the company drastically , just three months after the package delivery company had raised it. Adjusted earnings in 2019 will be no more than $16.60 a share, FedEx said in a statement Tuesday. That was below the lowest analyst estimate compiled by Bloomberg.

FedEx’s earnings, which come almost a month earlier than the fourth-quarter numbers of the majority of US companies, generally attract close attention because the delivery business is a proxy for the global economy and could give early warnings on trade and business investment issues.

Unfortunately, the global shipper didn’t have good news for investors.

“When you have a change that comes on you as fast as this did, it’s hard to react to it.

Our international business, especially in Europe, weakened significantly since we last talked with you.”

FedEx’s view on global growth and its impact on business is one of the clearest admissions by any global company that we have seen the peak of global expansion and the best is behind us.

Investors took the gloomy prediction seriously, sending FedEx shares tumbling the most in a decade. During the past three months, FedEx shares are down about 35 percent—more than twice the decline in the benchmark , which is down about 15.5%.

The stock’s underperformance and the company’s grim outlook are a warning for investors that they should avoid buying cyclical growth stocks tied to global growth, as they might see further erosion in values in the first quarter of 2019.

At FedEx, international revenue fell short of company expectations in the three months ended Nov. 30. In Asia, FedEx cited “continued tariff and trade concerns” as a drag. In Europe, it pointed to deterioration in Germany and Italy, as well as uncertainty in the UK over the country’s negotiations to leave the European Union.

To deal with sudden changes in the economic environment, the delivery company plans to start a voluntary buyout program for its US and international workers. FedEx employs more than 450,000 people globally.

The company said the vast majority of its buyout offers will be made to workers at the FedEx Express unit, which has 227,000 employees, and at FedEx Services, which provides back-office functions and employs another 30,000 people.

FedEx’s outlook on global trade and the economy cements our view that investors should increase the number of defensive stocks in their portfolios. These stocks are better positioned to withstand the economic slowdown, or even a recession.

That means picking stocks from the basic industries, such as utilities, telecom operators and top healthcare companies. These defensive areas of the market have a long track record of doing better in times of uncertainty while offering steadily growing dividends.

Companies such as Procter & Gamble (NYSE:), Verizon (NYSE:) and Merck (NYSE:) are among the best defensive bets for long-term investors in this market downturn. These companies could outperform the broader market if we’re in for a deep correction and a possible recession in 2019. Diversifying your portfolio with defensive stocks that pay regularly growing dividends is always a good strategy.

The godfather of Brexit who gave Theresa May a lifeline: Michael Gove By Reuters

Why the stock market tumbled Wednesday, ushering in its worst start to a quarter...