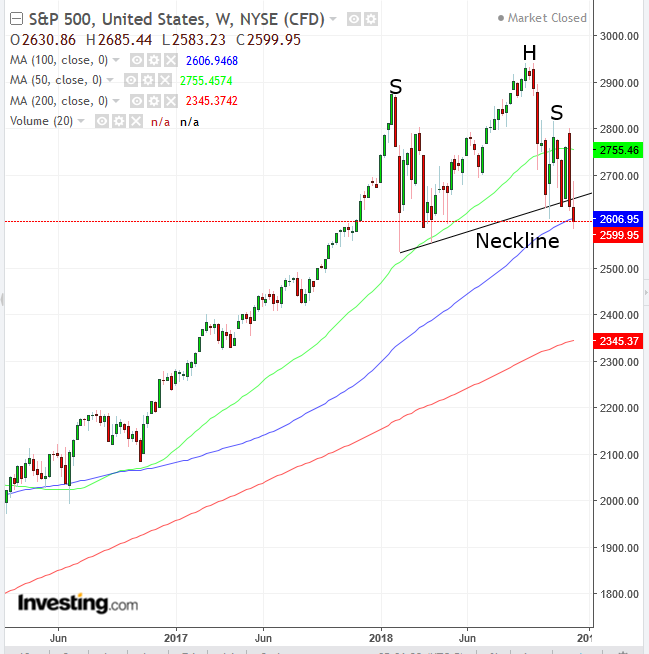 For a second week, all major US indices fell, closing at their lowest levels in at least nine months. As of Friday, the fell more than 10% below its October peak.

Stocks sold off violently to finish the trading week, with the , and joining the mega cap Dow to all end in the red. With the Dow’s negative Friday finish, all four major US indices are now officially in bear market territory.

Despite reports of trade progress and robust holiday spending, pessimistic investors focused instead on the perceived challenges of the upcoming year, following the almost across-the-board soft guidance meted out by companies during the just-ended earnings season and a slowing global economy.

Positive trade developments included: signals that China would become more welcoming to companies based abroad; indications that the country will also resume buying US agricultural products including ; and an announcement by the Chinese government that it would temporarily suspend retaliatory tariff hikes on US cars and auto parts, returning levies to July levels. Tesla (NASDAQ:) and BMW (OTC:) immediately priced-in the lower tariffs, cutting prices in China as way of bolstering falling local sales in the world’s largest auto market.

However, based on November information released late last week, China’s economy slowed more than expected in November, with slower growth in as well—including auto sales set for its first yearly loss since 1990.

On the other hand, US economic data was encouraging: grew faster than expected, supported by strong , and low . At this point, investors may not know what to wish for anymore.

Technically, the SPX may have completed a H&S top reversal. Just beware of a bear trap, as its downside breakout was less than 2%—though a weekend negative closing demonstrates bearish commitment. In addition, the price struggled at the 100 WMA. Since its September record peak, the S&P 500 has fallen 11.25% thus far.

The Dow plunged almost 500 points on Friday, for a 2.02% loss. The 30 component index was dragged down by shares of Johnson & Johnson (NYSE:), which plunged 10.04 percent , erasing $38 billion of market value, its sharpest daily selloff since 2002. Investors dumped the stock after a was published, alleging the company knew there were traces of asbestos in its baby powder as early as 1971.

Analysts at JPMorgan say that while the story is likely to endure, keeping prices depressed for an “extended period of time,” the issue has already been reported and is therefore no longer news, . 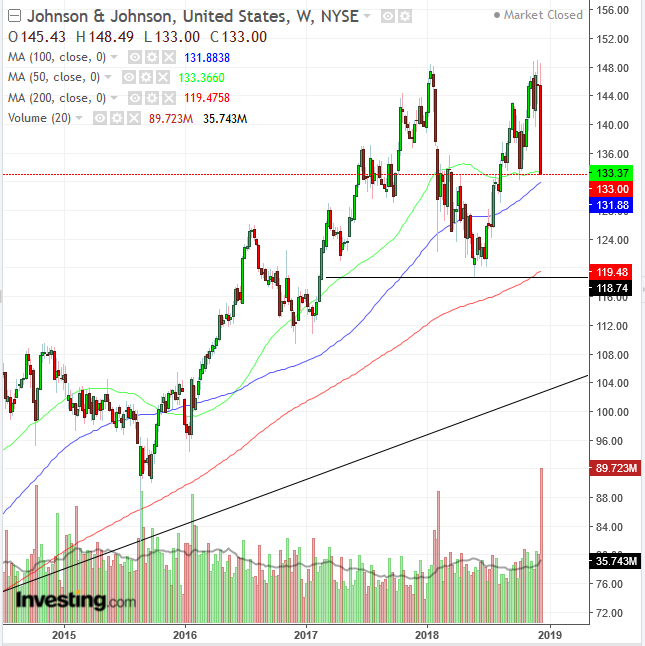 Technically, however, the price may be forming a double bottom, which would be complete if the price of the stock falls below 118.

For the week, the Dow was down 1.18%. The decline brought the total selloff since the index’s April record high to 10.17%.

The NASDAQ Composite was the clear underperformer on Friday, plunging 2.26%. On a weekly basis, however, it outperformed the other major indices, trimming just 0.84 for the week, reflecting the wild mood swings investors are going through. The tech-heavy index has fallen 14.8% since its February record high.

The small cap Russell 2000 was the week’s outperformer, falling only 1.72% on Friday. That’s ironic considering the positive trade-related reports. Small caps have tended to fall on an improved outlook on exports, since that benefits multinationals at the expenses of domestic firms.

But, as with the NASDAQ, we’re seeing a divergence between market activity on Friday versus the rest of the week. The small caps index dropped 2.57% for the week, making it the worst performer on that basis, reflecting market from another perspective. So far, the Russell 2000 has dropped 19 percent since its August record peak.

Just prior to Friday’s market rout, another sign of investor pessimism surfaced when Utilities shares hit an all-time high on Thursday. That’s a red flag for risk assets, signaling that investors are losing faith in growth. 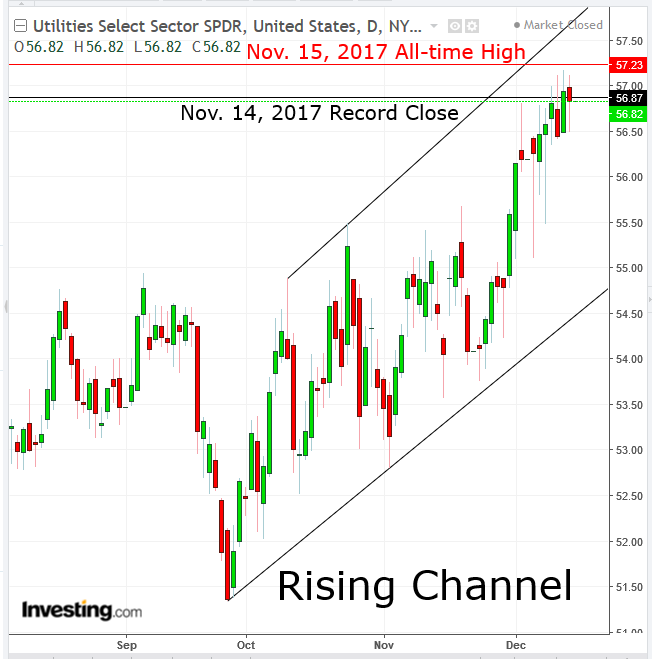 Technically, the Utilities Select Sector SPDR ETF (NYSE:), which is a proxy for the sector, is trading at the top of a rising channel, whose supply line may push prices back toward the channel bottom, but still remain within an uptrend. 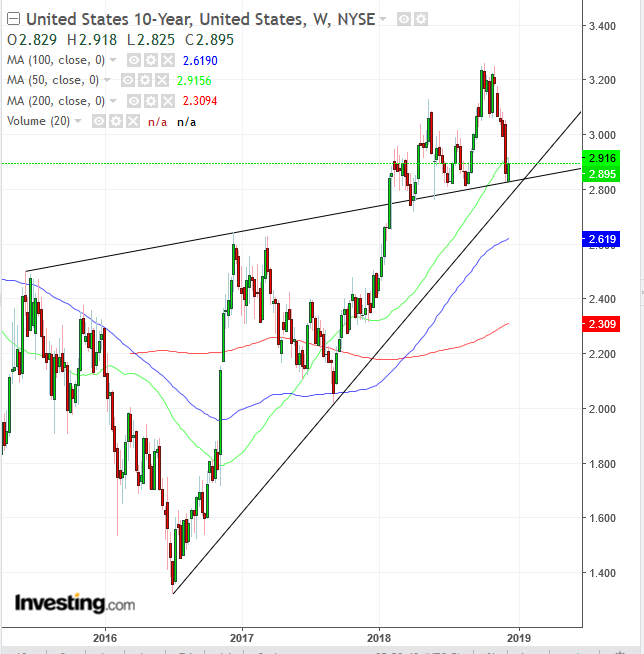 The yield on Treasurys dropped Friday, as investors rotated out of equities. However, on a weekly basis, they ended higher, confirming the support of a previous resistance, the supply line since mid-2015, as well as the uptrend line since mid-2016.

The pressure at these two converging trendlines is a visual representation of the current market dynamic. Should yields fall below 2.8, they would increase the bearish picture, as demand for Treasurys will break through a confluence of supports, demonstrating increasing pessimism in growth. 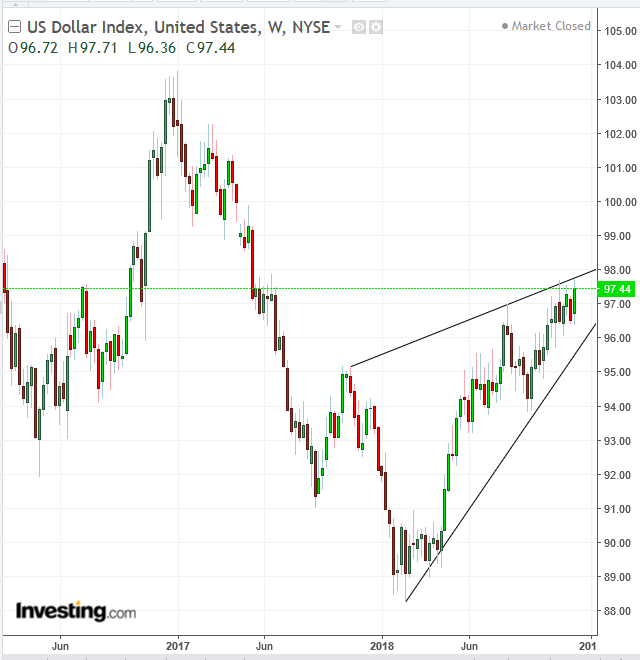 Though the fell on Friday, it advanced for the week. Technically, it’s being squeezed within a rising wedge, which is bearish in a downtrend. Note the set-up for a downside breakout, the contracting moving averages beneath the price action. 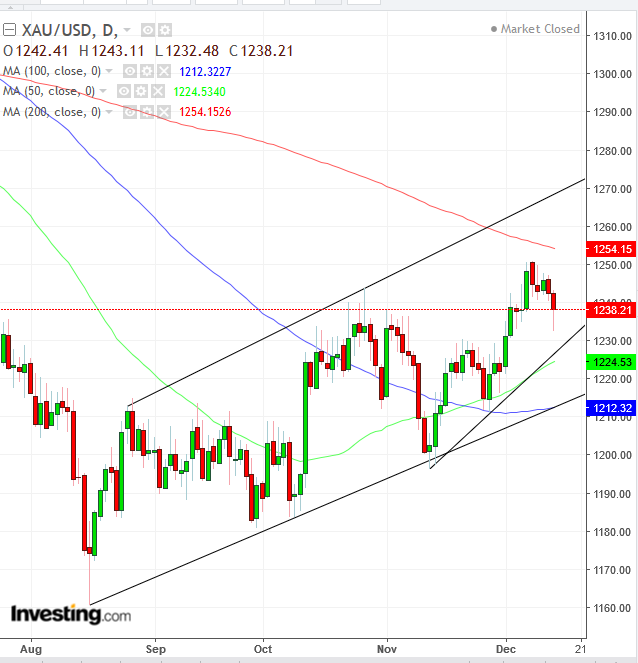 In mirror image of the global reserve currency, the price of is set to scale above the 200 DMA, as it trades within a rising channel, which may boost the precious metal further. 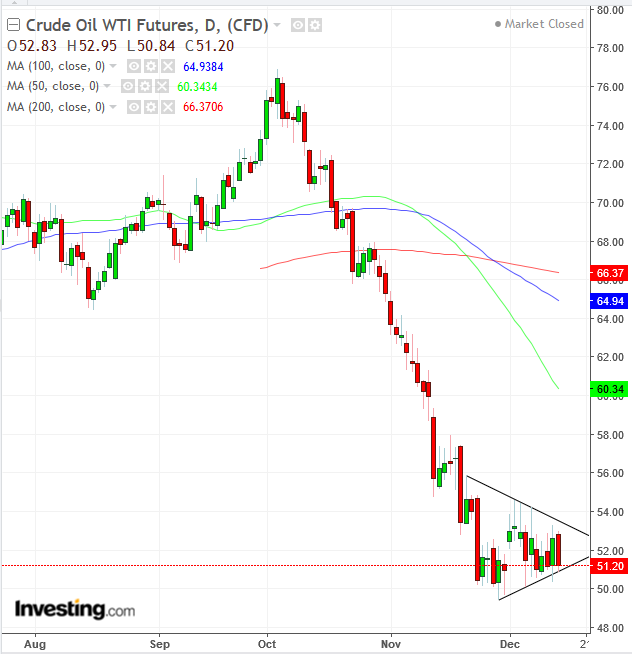 The price of also fell on Friday. The commodity stayed within its pennant, whose downside breakout would signal a resumption of the underlying downtrend. However, should prices meander through the apex, the pattern’s bearish bias would fizzle.

Elsewhere, UK Prime Minister Theresa May may have won last week’s parliamentary confidence vote, but she left the EU summit empty handed. Still, it’s possible France’s President Emmanuel Macron may have had an even worse week. He back-pedaled on a fuel tax hike and on a tax on pension benefits while introducing monthly bonuses of 100 to minimum-wage workers to quell 4 weeks of violent protests.

That package will add approximately €10 billion to France’s budget deficit, pushing it well above the EU limit of 3% of GDP. This move could not have come at a worse time for the EU, after it coerced Italy with disciplinary measures to reduce that country’s deficit to below 2%.

The ECB added to growing concerns of economic growth and geopolitical upheavals. During last week’s the European central bank reduced its growth outlook, even as it winds down QE.

All times listed are EST

8:30: US – and (November): watch for a rebound from last month’s decline in activity, as the US housing market continues to worry investors.