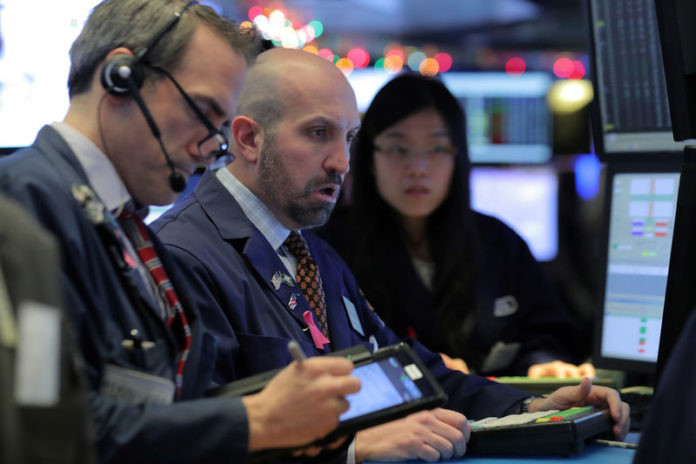 (Reuters) – Wall Street fell more than 1 percent on Friday, with a drop in technology stocks sparking a turnaround from earlier in the day, as renewed concerns of the China-U.S. trade situation offset the effect of a jump in oil prices and a tepid U.S. jobs report.

The trade standoff between Washington and Beijing has been a major overhang on equities for most of this year and this week has seen the markets sell off on diminishing hopes that their truce, brokered last weekend, would help resolve differences.

These concerns were fanned on Friday by White House trade adviser Peter Navarro’s comments that U.S. officials would raise tariff rates if the two countries could not come to an agreement during the 90-day negotiating period.

Stock futures pared losses after the report and the three major indexes moved higher shortly after the open. But the bump was short lived.

“The payrolls data was weaker-than-expected, but at the same time it was sort of a Goldilocks report, and if we didn’t have the lingering U.S.-China trade issue, then the markets would have reacted much more positively,” said Candice Bangsund, vice president and portfolio manager at Fiera Capital in Montreal.

“The underlying tone in the market today is risk aversion and it really doesn’t take much to rattle investors in this kind of environment.”

The S&P technology (), trade-sensitive industrials () and healthcare () indexes slid more than 2 percent, while six other sectors fell between 1 percent and 2 percent.

Apple Inc (O:), Microsoft Corp (NASDAQ:) <.msft.o>, Amazon.com Inc (O:) and Alphabet Inc (O:) were all down 2 percent or more and were the biggest drags on the S&P and the Nasdaq.

The three major indexes are set to end the week about 4 percent lower and have erased a large chunk of the near 5 percent gains last week that mostly came after the Federal Reserve signaled it was nearing the end of its rate hike cycle.

The energy and the defensive utilities () were the only two among the 11 major S&P sectors to trade higher.

No need to panic, no SIM cards issued through Aadhaar will be disconnected: UIDAI

What Is A Federal Jobs Guarantee?