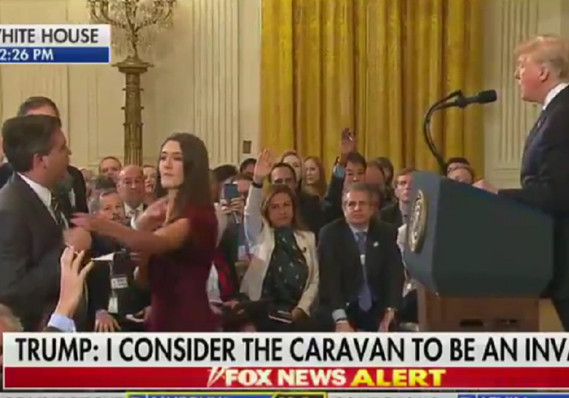 This story originally ran on Storyful, a social media intelligence agency that sources and verifies insights for media, communications and brand partners by analyzing digital content.

A video shared by White House Press Secretary Sarah Huckabee Sanders showing an incident involving CNN reporter Jim Acosta and a White House intern contains extra frames that do not appear in the C-SPAN broadcast of the event.

Acosta had his White House press credentials revoked after questioning President Donald Trump about the migrant caravan. Sanders later justified the ban by tweeting that Acosta had placed “his hands on a young woman just trying to do her job as a White House intern”.

Sanders then tweeted a video showing the incident, based on the C-SPAN coverage. However, according to an analysis of that video by Storyful, it has several frames repeated. These frames do not appear in the original C-SPAN footage, and appear to exaggerate the action of Acosta. The video shared by Sanders appeared under an hour after the same video, with the same close-up, was posted by Infowars.com contributor Paul Joseph Watson.

The video was posted using interlaced frames, rather than C-SPAN’s progressive frames, so cannot be made to match up exactly with the original footage. However, when compared side-by-side, there is a clear moment (frames 13, 14, 15 in our first clip, where C-SPAN version is on the left) when the Sanders video halts and the C-SPAN footage does not. The two clips, which were roughly in sync before that moment, are out of sync thereafter.

The same three still frames are repeated in the zoomed-in clips of the incident posted in the Sanders video.

Both the C-SPAN video and the footage posted by Sanders was set to play at 29.7 frames, as was the software suite we used to do this analysis, eliminating the possibility that the error was caused when the footage was imported into editing software by Storyful.

Watson said of allegations that his video was doctored: “The video was not ‘doctored’ by me – all I did was zoom in on the original from the Daily Wire. I did not ‘speed up’ anything. The screenshot from Sony Vegas Pro here proves that.”