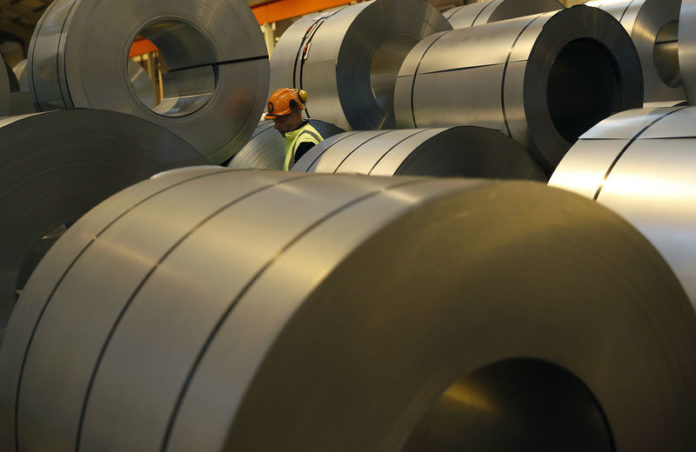 © Reuters. A worker walks through coils of steel to be used on Tata Steel’s new robotic welding line at their Automotive Service Centre in Wednesfield

LONDON (Reuters) – British steelmakers pay twice as much for electricity as their French competitors and 50 percent more than their German rivals, an industry report showed on Wednesday, piling pressure on the sector as Britain prepares to leave the European Union.

The report, commissioned by industry group UK Steel, shows the disparity between UK electricity prices and those in EU countries has increased for a third consecutive year, crippling energy-intensive sectors such as steel.

It comes ahead of Britain’s looming EU exit on March 29, which could hit UK manufacturing hard if it results in widespread customs delays, new tariffs and other trade barriers with Britain’s largest trading partner.

“The price disparity continues to erode the industry’s ability to attract international investment – investments will instead be made in markets with more favorable conditions,” said Gareth Stace, UK Steel’s director general.

“It is high time the government ensured the future viability of the UK steel sector.”

The industry report shows the government’s review on industrial strategy and energy costs, launched a year ago, has yet to protect vulnerable industries from the effects of Britain’s looming EU exit.

Steel, the second most used material in the world behind cement, often makes its way up Britain’s political agenda because it is seen as a strategic industry critical for growth. The metal is also used to make military weapons.

The UK steel industry is slowly emerging from a crisis that resulted in the loss of 7,000 steel jobs, about a quarter of the workforce, between September 2015 and March 2017. It is estimated that for every steel job axed, four jobs are lost in related sectors.

Tata Steel UK, Britain’s largest steelmaker, is still seen by some analysts as vulnerable to cutbacks because of poor earnings as its Indian parent prepares to finalize its merger with German steelmaker Thyssenkrupp (DE:) next year.

From $100 to $1 million, here are the 11 most outrageous bitcoin predictions

Twitter deletes over 10,000 accounts that sought to discourage U.S. voting By Reuters

Hog industry worldwide getting slaughtered in trade war By Reuters