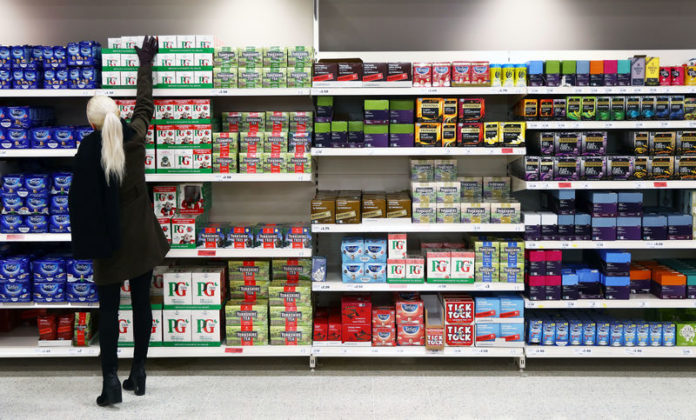 © Reuters. A shopper reaches for a box of tea in a supermarket in London

LONDON (Reuters) – British retail sales growth unexpectedly slowed to a six-month low last month, as shoppers held off winter clothing purchases due to mild weather and cut back on other goods after a heavy-spending summer.

Retail sales volumes in October alone dropped by 0.5 percent from September, in contrast to average forecasts in a Reuters poll of economists for them to rise by 0.2 percent.

Year-on-year growth slowed to 2.2 percent from an upwardly revised 3.3 percent in September, the slowest since April and weaker than economists’ forecasts for it to hold at September’s original 3.0 percent reading.

Looking at the three months to October as a whole, which smooths out some monthly volatility, sales growth slowed to 0.4 percent from 1.2 percent, also the weakest growth since April.

Britain’s economy has slowed since June 2016’s Brexit vote but enjoyed a solid summer, with household spending growing by 0.5 percent in the three months to September.

Less than five months before Britain is due to leave the European Union, there have been signs this week of some respite for households, with underlying pay growth picking up to its fastest since 2008 at 3.2 percent and inflation holding at an 18-month low of 2.4 percent.

But October data from the British Retail Consortium and Barclaycard showed households were continuing to shop cautiously after reining in spending in September, and that some shoppers were delaying purchases ahead of anticipated Black Friday discounts in November.

Thursday’s ONS data showed the sharpest monthly fall in purchases of household goods, such as electronics and home appliances, since December 2017.

Year-on-year growth in fuel sales was the weakest since March 2017.

Last week Marks & Spencer (L:) warned of an increasingly tough trading environment after disruption from the latest attempt to reinvent Britain’s most famous retailer dented first half sales and profit margins in both its food and clothing businesses.