Home Market UK automation picks up as flow of European workers slows ahead of... 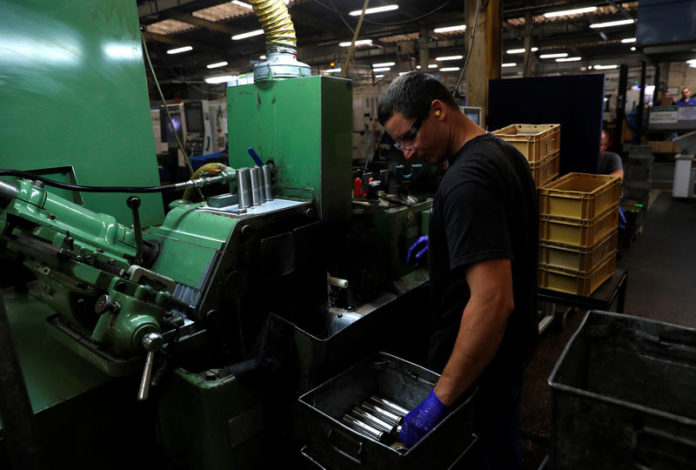 © Reuters. FILE PHOTO: A worker holds a component for a Volvo truck at the Muller manufacturing facility in Redditch

REDDITCH, England (Reuters) – At Muller Precision Engineering’s plant in Redditch, south of Birmingham, James Gibbs is in charge of three clattering pieces of machinery older than he is.

His two co-workers – one Polish, the other Hungarian – place semi-finished metal parts on plastic spindles every 20 seconds and hold them between grinders for another 15 seconds, then check their dimensions before dropping them into a tray.

“It’s a very repetitive job,” said Gibbs, 27. “You’ve got to keep your concentration for however many hours you’re on there, so that you don’t misload it.”

By the middle of next year, the work of two of the staff will be done by sensors and robotic arms.

British manufacturers have long lagged behind their developed country peers on automation, thanks in part to a seemingly inexhaustible pool of workers from Europe.

The flow of low-cost labor has become less reliable since Britain voted to leave the European Union in June 2016, however. Net migration from eastern Europe hit an eight-year low in the 12 months to March, official data shows, and industry groups fear the situation will only get worse.

Unlocking automation investment could have big implications for the economy. If companies tilt away from labor, economists say, it could boost productivity and take the lid off wage increases that have languished at around 2 percent in recent years.

Manual work at the site can be boring and dangerous, which can make it hard to find staff, said Adam Cunningham, managing director at the plant, which employs around 130 people.

“That, along with a Brexit that reduces the amount of labor coming into the country, made us say we need to look at automation in that particular area,” he said. “Basically, we’re going to be replacing humans with robots.”

The International Federation of Robotics (IFR) says British factories are less likely to use industrial robots than any other leading economy and even some countries in eastern Europe.

Bank of England (BoE) officials and industry experts say they may finally be catching up.

While the blog did not specifically mention Brexit, it referred to problems with recruitment in sectors that rely heavily on migrants.

Last year Britain’s statistics agency cut its long-run forecast for immigration compared with before the referendum, and the central bank said a Brexit-related slowdown in labor supply was reducing the rate at which the economy could grow.

British businesses are investing in robots for factories, meat processing plants and warehouses, as well as self-service checkouts in supermarkets and automated check-in for hotels, research by the BoE’s regional staff, or “agents”, showed. The bank’s 30 agents visit 9,000 businesses a year to spot trends.

Businesses were focusing on investment in automating labor-intensive processes rather than boosting production more than ever before, the research indicated.

Some catch-up on automation had been expected after several years of falling unemployment. But the fact it is happening now is notable, given that economists believe Brexit is likely to dampen business investment overall.

ROBOT IMPORTS ON THE RISE

The trend is also showing up in official indicators.

Customs data shows imports of multi-purpose industrial robots, which can be reprogrammed to perform new tasks and usually have arms capable of moving in three dimensions, rose to a record 83.2 million pounds in the year to the end of July, up by 72 percent on the previous 12-month period.

These are the types of robots the Frankfurt-based IFR is talking about when it says Britain is behind on automation.

Manufacturers used just 71 multi-purpose industrial robots per 10,000 factory workers in 2016, compared with 132 in France, 309 in Germany and 631 in South Korea, the world leader, according to IFR data.

Partly this reflects the smaller size of the UK’s automotive sector, as car companies make particularly high use of robotics. But even stripping out carmakers, British manufacturers are far behind their peers.

The BoE study said historically lower labor costs in Britain compared with continental Europe was an important factor. UK unemployment is currently at a 43-year low.

“But with the gap in relative labor costs starting to close, some of those contacts are now actively looking to deploy the same technologies in the UK as they do overseas,” it said.

The BoE agents’ report for September’s Monetary Policy Committee meeting said a significant slowdown in migration from elsewhere in the EU “was reported to have exacerbated skills shortages in agriculture, manufacturing and hospitality”.

“The market is really buoyant. Everyone’s got a full order book,” he said.

BoE Governor Mark Carney said last month that one in 10 British jobs was at risk over the long term from automation, including artificial intelligence and robotics. On Wednesday, the bank’s chief economist Andy Haldane cited research that suggested if UK automation caught up with that of the United States, annual wage growth could fall by 0.4 percentage points.

Guy Michaels, an associate professor at the London School of Economics, said his study of trends across 17 countries suggested rising automation had not cut factory jobs significantly so far, however.

Part of that is due to retraining that kept people in work even after they were replaced by robots, strengthening the case that automation could increase UK productivity, which lags more than 20 percent behind the United States, France and Germany.

“Overall we don’t find a particularly significant effect of robot adoption on overall employment in the adopting industry,” Michaels said.

British workers at the lower end of the pay scale are most at threat because they tend to find it harder to move up the skills ladder and because that is where costs per worker are rising most steeply, thanks to the fact the minimum wage is increasing faster than average wages.

Muller pays about one pound an hour above the minimum wage for basic factory jobs, Cunningham said.

“We like to keep the differential in place if we can.”

Automation at Avara’s plant on the edge of Telford, 40 miles (64 km) northwest of Redditch, allows it to handle twice the volume of poultry possible seven years ago for the same 1,000 workers, said operations director Philip Davidson.

This year, for the first time, Avara has recruited apprentices on a training program that will ultimately lead to a food science degree, Davidson said.

The plant’s high productivity allows salaries to be in the top quartile for the sector, he said.

While British workers have always been hard to find, laborers from elsewhere in Europe were becoming scarcer, Davidson, Hague and Cunningham agreed.

“Clearly Brexit has had an impact,” Davidson said.

Trump’s next chief of staff will be ‘wartime consigliere,’ says Rahm Emanuel | Republicans...

Futures drop about 1 percent on global growth risks By Reuters

iPhone sales in India to dip for first time in four years: Report