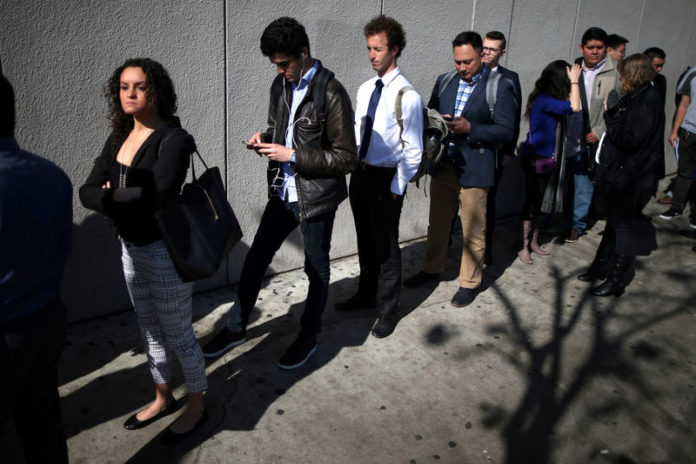 Other data on Thursday showed worker productivity slowing in the third quarter, but still growing at a relatively decent clip and compensation surging, adding to recent reports and anecdotal evidence that the strong labor market was pushing up wage gains.

Initial claims for state unemployment benefits dropped 2,000 to a seasonally adjusted 214,000 for the week ended Oct. 27, the Labor Department said. Data for the prior week was revised to show 1,000 more claims received than previously reported. Claims fell to 202,000 during the week ended Sept. 15, which was the lowest level since November 1969.

Economists polled by Reuters had forecast claims falling to 213,000 in the latest week. The Labor Department said claims for North Carolina continued to be affected by Hurricane Florence, while Hurricane Michael impacted those for Florida and Georgia.

The four-week moving average of initial claims, considered a better measure of labor market trends as it irons out week-to-week volatility, rose 1,750 to 213,750 last week.

The claims data has no bearing on October’s employment report, which is scheduled for release on Friday, as it falls outside the survey period.

According to a Reuters survey of economists, nonfarm payrolls probably rebounded by 190,000 jobs in October after Florence depressed restaurant and retail payrolls in September. But the pick-up in job growth was likely tempered by Michael, which struck the Florida Panhandle in mid-October.

Payrolls increased by 134,000 in September, the fewest in a year. The unemployment rate is forecast unchanged at a near 49-year low of 3.7 percent in October.

U.S. financial markets were little moved by the data.

The labor market is viewed as being near or at full employment. There are a record 7.14 million open jobs in the economy, suggesting a shortage of skilled workers.

Thursday’s claims report also showed the number of people receiving benefits after an initial week of aid declined 7,000 to 1.63 million for the week ended Oct. 20, the lowest level since July 1973. The four-week moving average of the so-called continuing claims decreased 6,250 to 1.64 million, the lowest level since August 1973.

In a second report on Thursday, the Labor Department said nonfarm productivity, which measures hourly output per worker, increased at a 2.2 percent annualized rate in the third quarter.

That was a step down from the 3.0 percent pace logged in the April-June period, which was the strongest since the first quarter of 2015. The slowdown in productivity is in line with a moderation in gross domestic product growth for that period.

The economy grew at a 3.5 percent rate in the July-September period after a robust 4.2 percent pace in the second quarter. Compared to the third quarter of 2017, productivity increased at a rate of 1.3 percent.

The rise in compensation mirrors a solid gain in employment costs in the third quarter. The Labor Department reported on Wednesday that annual wage growth recorded its biggest increase in 10 years in the July-September quarter.

‘Trap door under the market’ could slash S&P 500 by two-thirds, warns fund manager