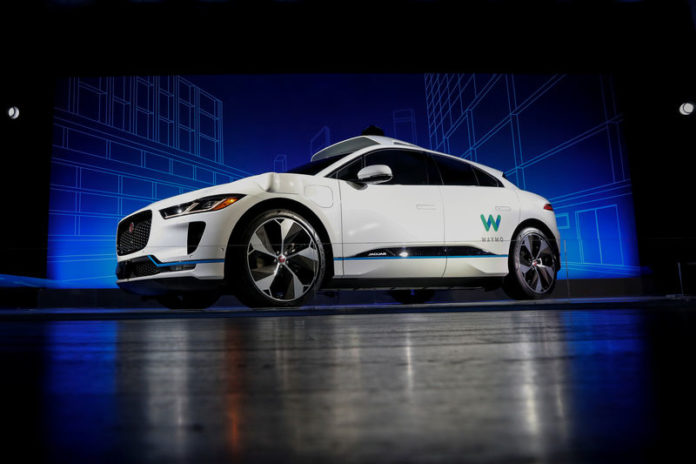 © Reuters. A Jaguar I-PACE self-driving car is pictured during its unveiling by Waymo in the Manhattan borough of New York

WASHINGTON (Reuters) – The National Highway Traffic Safety Administration (NHTSA) is moving ahead with plans to revise safety rules that bar fully self-driving cars from the roads without equipment like steering wheels, pedals and mirrors, according to a document seen by Reuters.

The auto safety agency, known as NHTSA, “intends to reconsider the necessity and appropriateness of its current safety standards” as applied to automated vehicles, the U.S. Transportation Department said in an 80-page update of its principles dubbed “Automated Vehicles 3.0” being made public on Thursday.

The department disclosed that in an upcoming rulemaking NHTSA wants public comment “on proposed changes to particular safety standards to accommodate automated vehicle technologies and the possibility of setting exceptions to certain standards—that are relevant only when human drivers are present” for autonomous vehicles.

U.S. Transportation Secretary Elaine Chao, who will release the report at event at the department’s headquarters on Thursday, said in the report self-driving cars have the potential to dramatically reduce traffic crashes and road deaths, but added the “public has legitimate concerns about the safety, security, and privacy of automated technology.”

Automakers must currently meet nearly 75 auto safety standards, many of which were written with the assumption that a licensed driver will be in control of the vehicle.

General Motors Co (N:) in January filed a petition seeking an exemption for the current rules to deploy vehicles without steering wheels and other human controls as part of a ride-sharing fleet it plans to deploy in 2019.

NHTSA has not declared the GM petition complete, a step necessary before it can rule on the merits. NHTSA said it plans to propose modernizing procedures to follow when reviewing exemption petitions.

Alphabet Inc’s (O:) Waymo unit plans to launch an autonomous ride-hailing service for the general public with no human driver behind the steering wheel in Arizona later this year. But unlike GM, Waymo’s vehicles will have human controls for the time being.

In March, a self-driving Uber Technologies Inc [UBER.UL] vehicle struck and killed a pedestrian, while the backup safety driver was watching a video, police said. Uber suspended testing in the aftermath and some safety advocates said the crash showed the system was not safe enough to be tested on public roads.

The stepped up regulatory focus by NHTSA comes as legislation in Congress to speed self-driving cars, which passed the U.S. House in 2017, has stalled and has only an outside chance of getting approved this year, congressional aides say.

But automakers have warned it could take too long for NHTSA to rewrite the rules to allow for the widespread of adoption of self-driving cars without human controls.

The agency said it “may also consider a more fundamental revamping of its approach to safety standards” for automated vehicles and added future requirements “need to be more flexible and responsive, technology-neutral, and performance-oriented.”

NHTSA said it could require manufacturers “to use test methods, such as sophisticated obstacle-course-based test regimes” or it could also adopt computer simulation requirements as U.S. law “does not require that NHTSA’s safety standards rely on physical tests and measurements, only that they be objective, repeatable, and transparent.”

The sites, including a Michigan center that President Donald Trump visited last year, were named by Congress to be eligible for $60 million in grants “to fund demonstration projects that test the feasibility and safety” of self-driving vehicles.

The report said “given the rapid increase in automated vehicle testing activities in many locations, there is no need for U.S. DOT to favor particular locations.”

The Transportation Department also announced it will launch a study of the workforce impacts of automated vehicles with the Labor, Commerce, and the Health and Human Services departments.

The report also said the Trump administration will not call for ending human driving. The department “embraces the freedom of the open road, which includes the freedom for Americans to drive their own vehicles… We will protect the ability of consumers to make the mobility choices that best suit their needs.”