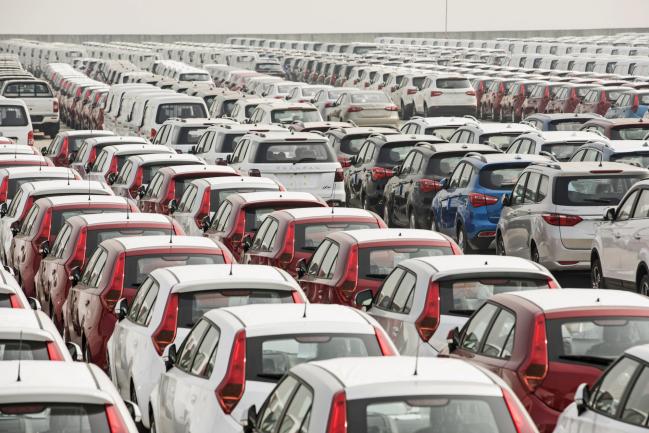 © Bloomberg. Vehicles stand at a port in Shanghai, China, on Monday, April 30, 2018. China won’t succumb to

(Bloomberg) — The White House is circulating a draft report by the U.S. Commerce Department over whether to impose tariffs on automobile imports to protect national security, three people familiar with the matter said.

President Donald Trump is scheduled to meet with senior members of his trade team on Tuesday to discuss how to proceed on the potential tariffs, two of the people said. Speaking on condition of anonymity to discuss internal deliberations, they didn’t give any insight into Commerce’s conclusions.

On a day when U.S. stocks were broadly lower, shares of General Motors Co (NYSE:). declined and Ford Motor (NYSE:) Co. trimmed an advance following news of the auto-tariff report.

The department in May launched an investigation into the national-security impact of car imports under section 232 of the 1962 Trade Expansion Act, the same provision Trump used to justify steel and aluminum tariffs earlier this year.

The probe covers imports of automobiles, including SUVs, vans and light trucks, as well as auto parts. Commerce has until February to report its findings to the president, who has final say on any tariffs.

A Commerce spokesman and White House communications staff had no immediate comment.

At public hearings in July, companies and governments from Europe to Asia warned that duties on car imports would hurt the U.S. economy, disrupt the global automotive industry, and widen the rift between America and its closest allies.

There’s no indication when Trump will make a final decision on autos tariffs but he has repeatedly signaled that he’s getting impatient with his trading partners, including the European Union and Japan. Trump has threatened a 25 percent tariff on imported cars.

EU Commission President Jean-Claude Juncker signaled Monday that Europe’s avoidance of American car tariffs might last only until year-end, the latest indication of the fragility of the trans-Atlantic truce reached in the summer.

At a press conference last week, Trump expressed his frustration about what he sees as an unfair auto trading relationship with Japan. “Say hello to Shinzo,” Trump told a Japanese reporter, referring to Japanese Prime Minister Shinzo Abe. “I’m sure he’s happy about tariffs on his cars.”

“I tell him all the time that Japan does not treat the United States fairly on trade. They send in millions of cars at a very low tax. They don’t take our cars. And if they do, they have a massive tax on their cars,” Trump added.

South Korea also has still not gotten assurances from the White House that it would be excluded from any potential auto tariffs even after it struck a revised trade deal with the Trump administration, two people familiar with the matter said.

Trump’s imposition of duties on imported steel and aluminum sparked swift retaliation from China and some of America’s closest allies including Canada and the European Union.

‘If you can’t beat the market, how did Warren Buffett do it?’ and other...

Italy has ‘one thousand’ ways to improve budget: government official By...

Claire’s Is Entering A New Chapter In Life: Bankruptcy