Home Finance U.S. and China trade barbs at WTO amid calls for reform By... 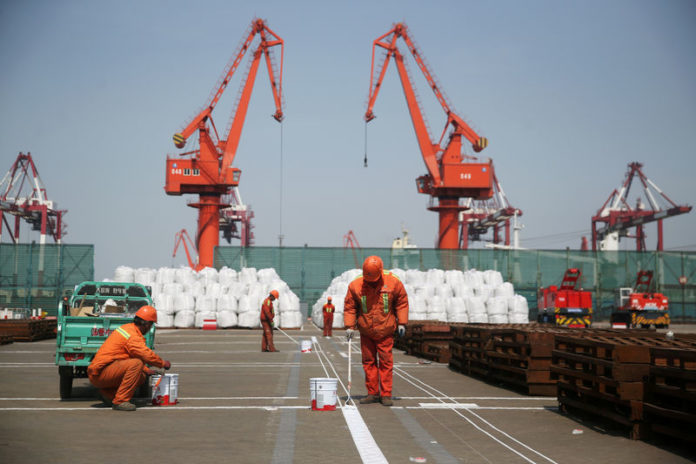 © Reuters. FILE PHOTO: Workers paint the ground at a port in Qingdao

The heated words, in texts seen by Reuters, were exchanged at the start of a closed-door review of U.S. trade policies, held every two years at the WTO, which continues on Wednesday.

Shea expressed concern about the WTO dispute settlement system having “strayed far from the system agreed to by members” and said that the Appellate Body had overreached in some legal interpretations.

Zhang countered that by blocking the selection of judges, Washington was putting the system into paralysis.

To force reform at the WTO, Trump’s team has refused to allow new appointments to the Appellate Body, the world’s top trade court, a process which requires consensus among member states. As a result, the court is running out of judges, and will be unable to issue binding rulings in disputes.

Shea described the U.S. economy as “one of the most open and competitive economies in the world”, with among the lowest tariffs globally, rejecting criticism by some of the U.S. approach as “unilateralist and protectionist”.

China has pursued “non-market industrial policies and other unfair competitive practices” aimed at supporting its domestic industries while restricting or discriminating against foreign companies and their goods and services, he said.

“The WTO is not well equipped to handle the fundamental challenge posed by China, which continues to embrace a state-led, mercantilist approach to the economy and trade,” Shea said.

He did not refer to the dispute on steel or automobiles which brought the two powers to the brink of a major trade war but defended the U.S. “Section 301” investigation that found in March that Chinese practices related to technology transfer, intellectual property and innovation were discriminatory.

On Section 301, Zhang said the U.S. measures vastly increased tariffs, “bringing back to life the ghost of unilateralism that has been dormant for decades”.

Shea said the United States was committed to working with like-minded members to address concerns on the functioning of the WTO. “Reforms are necessary for the continued viability of the institution,” he said.

Zhang echoed his call, but said: “If the roof of this building is leaking, we should work together to fix it, rather than dismantling it and exposing all of us to rains and storms.”