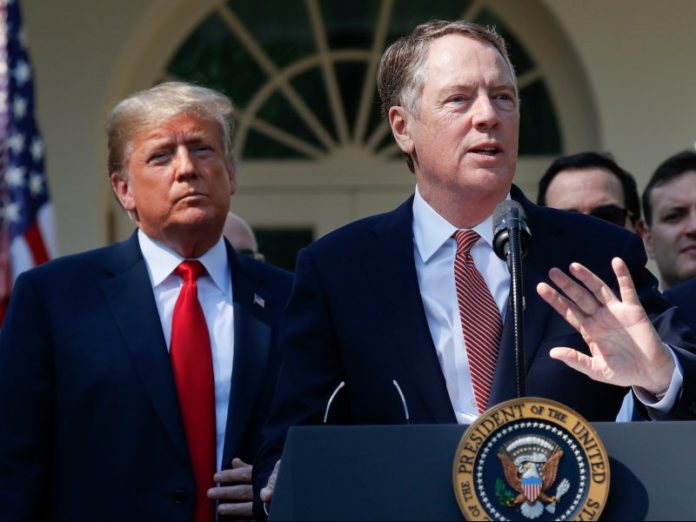 President Donald Trump named US Trade Representative Robert Lighthizer as the lead negotiator in follow-up talks with China over trade, elevating the longtime China hawk to a critical role over the next few months.

The move could dampen investor and business enthusiasm over the preliminary trade agreement Trump made with Chinese President Xi Jinping at the G20 summit last weekend.

Lighthizer is also the third point person since trade negotiations with the Chinese began in 2017, following Commerce Secretary Wilbur Ross and Treasury Secretary Steven Mnuchin, neither of whom were able to strike a concrete, long-term deal with Beijing.

The appointment of Lighthizer reportedly took Chinese officials by surprise, as Lighthizer has a more critical view of China than Mnuchin.

According to The Wall Street Journal, Lighthizer opposed China’s entry into the World Trade Organization in the 1990s and more recently was a driving force behind Trump’s decision to impose tariffs on roughly $250 billion worth of Chinese goods.

Lighthizer’s office was also responsible for the original report earlier this year on China’s alleged theft of US intellectual property that formally kicked off the tariff process. In a follow-up report in November, the US Trade Representative’s office reiterated that China had made no progress in addressing the underlying issues that led to the trade war.

Read more: The US-China trade war might still rage on despite a breakthrough deal between Trump and Xi

During his time in President Ronald Reagan’s administration, Lighthizer was also known as a hard-nosed negotiator. In one famous incident, Lighthizer smoked an entire box of Cuban cigars as a tactic to throw off counterparts from the then-Soviet Union. During the same period, Lighthizer became known among Japanese officials as “the missile man” after throwing a set of proposals back as a paper airplane.

Trump appears to have confidence in the US Trade Representative after Lighthizer was able to reach a deal to update the North American Free Trade Agreement (NAFTA) with Mexico and Canada.

White House officials downplayed Lighthizer’s role, saying that the talks would be a team effort.

“And, by the way, I personally — I’m very happy that Bob Lighthizer is going to be running the trade negotiating side and the monitoring side. And again, Mr. Mnuchin will be very involved. Others of us will be very involved,” Larry Kudlow, the director of the National Economic Council and pro-free trade advocate, said in a conference call Monday.

Commerce Secretary Wilbur Ross told CNBC on Tuesday that the concern over Lighthizer’s stronger stance on China was overblown since the US Trade Representative always takes the lead in trade negotiations.

“Bob Lighthizer by statute is the official negotiator for the US on trade deals, just as he was in the US-Mexico-Canada deal,” Ross said. “So I don’t know why anybody would have been that surprised that he was the lead negotiator. He has been acting in that capacity, so that’s not really news.”