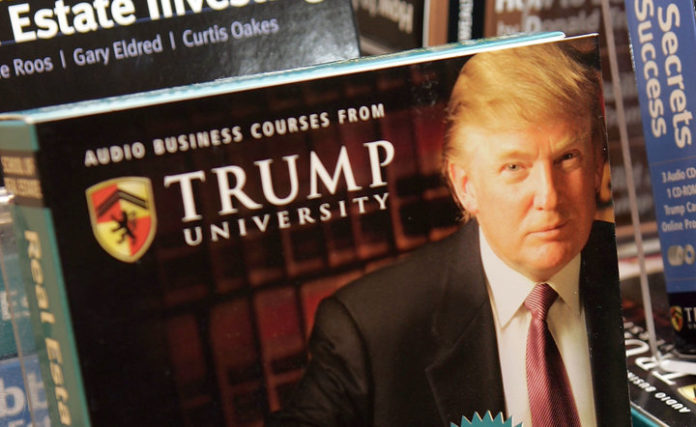 In 2014, a financially struggling hospice caregiver in California decided to invest in a video phone marketing company by the name of ACN.

She knew little about business and even less about telecommunications, but a video heavily featuring Donald Trump’s endorsement of the company as “one of the best businesses” played at an ACN “training event” she attended allayed her fears.

The woman bought in, paying ACN a $499 “registration fee” to join the company, then forking over thousands more to attend “training events” all over the country over the next two years.

Trump photos and the Trump video featured heavily in every seminar and twice-monthly meetings ― a fixture seemingly designed to ease questions of legitimacy and coax members to continue forking over cash. (For the thousands she put in, by the time the woman quit ACN, she had got back just $38.)

And according to a lawsuit filed in federal court in Manhattan on Monday, ACN, along with two other Trump-endorsed “business opportunities,” amounted to little more than predatory schemes that deliberately preyed on inexperienced, financially distressed investors. The suit, filed on behalf of four people who lost money in the get-rich-quick schemes, seeks class action status on behalf of thousands of similarly treated individuals.

The lawsuit claims ACN secretly paid Trump millions of dollars for his endorsement (Trump claimed in his ACN promo that his endorsement was “not for any money”) in exchange for his falsely portraying ACN and several other schemes as legitimate business opportunities.

In addition to ACN, the suit mentions the Trump Network, which peddled bogus “personalized” vitamin regimens, and the Trump Institute, which, like the similarly legally embroiled Trump University, charged attendees as much as $35,000 to attend multiday seminars on Trump’s real estate “secrets,” as examples of other similar schemes. (The Trump Institute also reportedly plagiarized some of its course materials and received an F rating from the Better Business Bureau.)

The suit describes the Trump endorsements together as “a pattern of racketeering activity.”

Donald Trump, the Trump Organization, Donald Trump Jr., Eric Trump and Ivanka Trump are listed as co-defendants in the suit.

“The Trumps conned each of these victims into giving up hundreds or thousands of dollars ― losses that many experienced as devastating and life altering,” the suit claims. “Surely the Trumps dismissed these amounts (and the lives they wrecked) as trivial. But by defrauding so many for so long, the Trumps made millions.”

In a statement to The New York Times, which first reported the story, the Trump Organization dismissed the suit as a “completely meritless” attempt to push a political agenda:

Read the full 160-page filing, below:

Brexit breakdown could be bullish for U.S. stocks

Top 5 Things to Know in the Market on Friday By Investing.com

When Do We Turn Our Clocks Back?