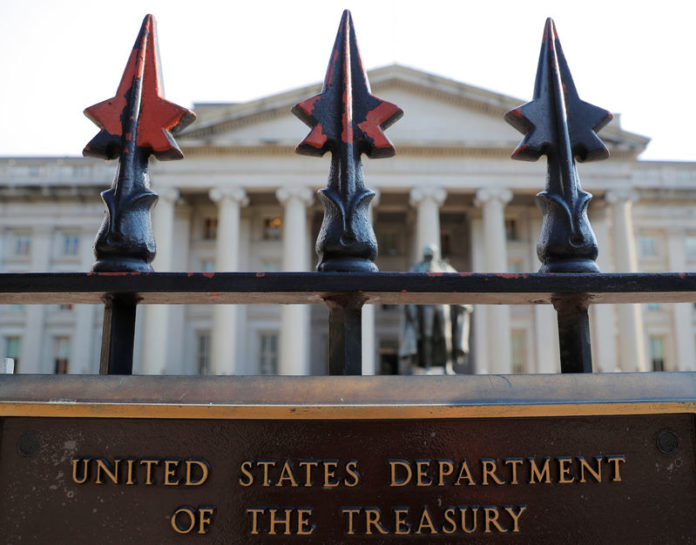 © Reuters. A sign marks the U.S Treasury Department in Washington

WASHINGTON (Reuters) – As of November 10, investors in 27 industries will come under tougher scrutiny as an inter-agency panel led by the U.S. Treasury Department begins tightening foreign investment rules as part of a pilot program, according to a senior treasury official.

The panel, called Committee on Foreign Investment in the United States (CFIUS), reviews mergers and stock purchases to ensure that they do not harm national security. It was strengthened by legislation in the National Defense Authorization Act and signed into law in August.

Investments in 27 industries, such as telecommunications and semiconductors, will be required to be reported to CFIUS if the foreign investor’s role would allow access to non-public information or afford the power to nominate a board member or make other substantial decisions, the official said.

CFIUS will have the option to approve it within 30 days or open a fuller investigation, the official said.

The official said the agency was not targeting any country.

Much of the panel’s highest profile work focuses on Chinese companies, many with government links, which have tried to buy U.S. high-end semiconductor makers and other tech companies.

“We know there are transactions out there right now that present national security concerns,” the official said.

The pilot program is scheduled to begin on November 10 and run for more than a year, during which time formal, permanent rules implementing the legislative changes will be written, the official said.

“What we do and what we learn from this program will go into the proposed rules,” the official said. “We don’t know how many declarations we’ll have.”

Other portions of the legislation, such as rules allowing CFIUS to stop foreign purchases of land near military installations or ports, will be addressed at another time, the official said.

CFIUS has taken a tough stance against Chinese or other foreign investment in sensitive industries, ranging from high-end semiconductors to real estate.

In August, for example, CFIUS ordered Chinese conglomerate HNA Group Co Ltd to sell its majority stake in a Manhattan building whose tenants include a police precinct tasked with protecting Trump Tower.

Government to release GDP back series data today? Here’s what happened so far

A tough road ahead for India’s battered rupee: Reuters poll By Reuters

CAG Rajiv Mehrishi says100% audit possible, but this needs to be done

Concerns grow over Israel’s loosening budget ahead of election year By...