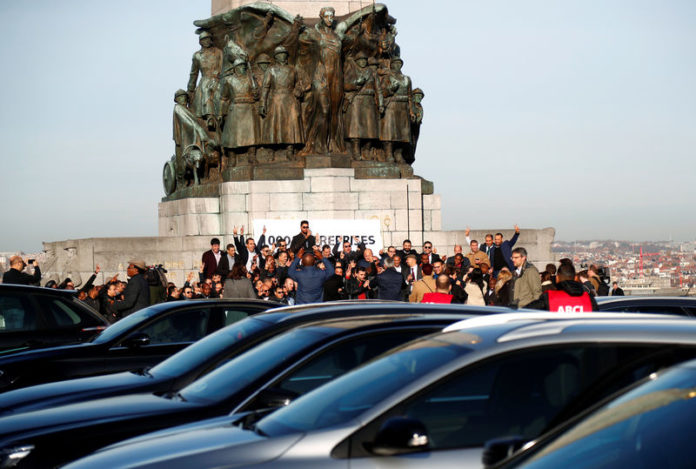 © Reuters. FILE PHOTO: Uber drivers and limousine chauffeurs are seen during a protest outside the Brussels’ Palace of Justice

KARLSRUHE, Germany (Reuters) – Germany’s highest court ruled on Thursday that a defunct limousine service offered by Uber [UBER.UL] was illegal, in a setback for the U.S. ride-hailing company that has struggled to comply with the law in Europe’s largest economy.

The Federal Court of Justice, handing down a final decision, upheld lower-court rulings in favor of a complaint brought by a Berlin taxi business that the so-called Uber Black service had violated German laws governing car rentals.

Responding to the judgment, Uber said it had taken Uber Black out of service in 2014, adding that the services it now operates in four German cities complied with the law.

“This ruling has no impact on our current services in Germany as we changed our operating model more than four years ago,” the company said in a statement.

“We will continue to engage with local stakeholders as we develop services that address Germany’s growing transportation needs and shape the future of urban mobility in a responsible way.”

Uber, which could fetch a valuation of $120 billion when it floats next year in what would be the biggest stock market listing by a tech startup, has had a series of run-ins with regulators, courts and drivers around the world.

In Britain, the company has fought a long-running court battle over whether its drivers should be given workers’ rights, including a minimum wage. The company argues that drivers are self-employed.

In the German case, two lower courts had banned the Uber Black service based on the complaint brought by a Berlin taxi operator, Richard Leipold.

He had argued that its operations should be covered by laws covering car rentals. These require a car to return to its base after each trip and for trips to be awarded by a dispatcher.

Uber now offers its services in four German cities – Berlin, Munich, Frankfurt and Duesseldorf – and says it is in full compliance with German laws.

Its Uber X service operates in partnership with car rental companies whose drivers hold a license to carry passengers, a company spokesman said. Its UberTaxi service functions as a regular taxi service.

Establishing an important principle, the Federal Court found that Uber was subject to German transportation laws, dismissing arguments that European Union rules governing the provision of services should apply.

Is luck driving your retirement investments?

China is a problem because of trade deficit, theft of IP and force transfer...