Home Economy Thousands rally in Taiwan, call for referendum on independence from China By... 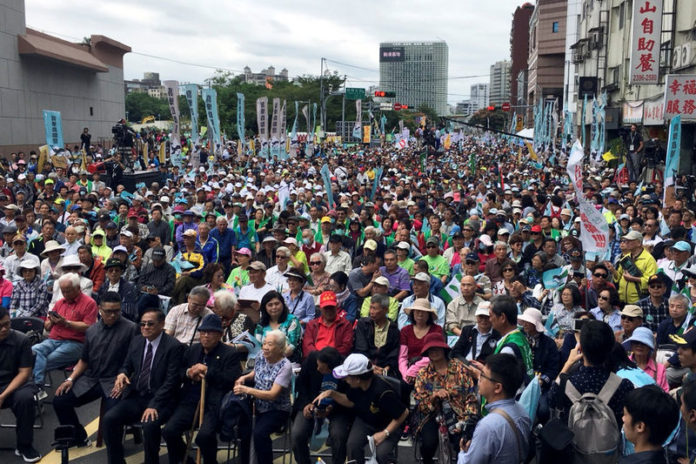 © Reuters. Pro-independence supporters take part in a rally to protest against what they claim are annexation efforts by China, and to call for a referendum, in Taipei

TAIPEI (Reuters) – Several thousand pro-independence demonstrators rallied in Taiwan’s capital on Saturday to protest against Beijing’s “bullying” and called for a referendum on whether the self-ruled island should formally declare independence from China.

The rally, one of the largest seen on Taiwan this year, was organized by a group called Formosa Alliance founded six months ago, and the protesters gathered near the headquarters of President Tsai Ing-wen’s Democratic Progressive Party (DPP).

Kenny Chung, a spokesman for Formosa Alliance, described the turnout as “very successful”.

Relations with Beijing have deteriorated since Tsai came into office in 2016, with China suspecting that she wants to push for formal independence, a red line for Beijing.

China views Taiwan as a wayward province and has never renounced the use of force to bring democratic Taiwan under its control. This year, China increased military and diplomatic pressure, conducting air and sea military exercises around the island and persuading three of the few governments still supporting Taiwan to drop their backing.

Protesters said Tsai’s government should push back against Beijing, and advocated a referendum on independence to avoid being “swallowed up”. Some carried placards bearing the message: “No more bullying; no more annexation”.

The next presidential election is not due until 2020, but the ruling DPP will draw some indication of support from island-wide local elections that are set to take place in late November.

Tsai said last week she will maintain the status quo with Beijing, but she also vowed to boost Taiwan’s national security and said her government would not submit to Chinese suppression.

Beijing has already been irked by the Taiwanese government’s approval for a referendum next month to decide whether to enter future Olympics events as “Taiwan” rather than “Chinese Taipei”, the name agreed under a compromise struck in the late 1970s.

Retail sales get off to good start for the holiday season on strong online...

Mortgage rates slide the fastest in four years, but it may be too late...

US threatens to block European banks from exchanges over Brexit derivatives...