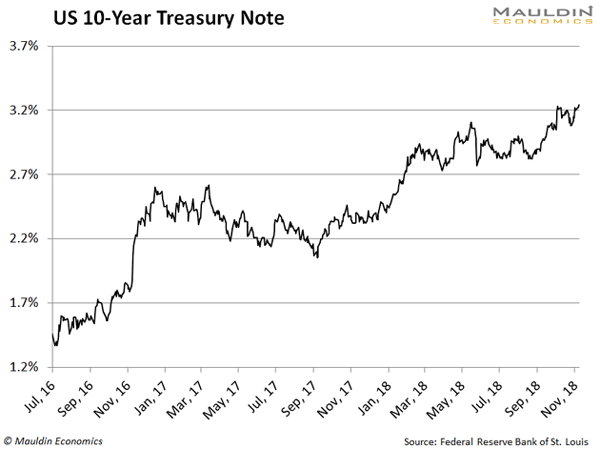 
also known as the fear index, has recently hit its highest level in six months. The S&P 500 Index


had a 10% decline before rebounding.

The reason is rising interest rates. The Federal Reserve has raised interest rates three times this year. Most expect one more increase by the end of the year.

Since 2016, the yield on the 10-year Treasury bond has more than doubled and hit its highest level since July 2011.

Central banks raise interest rates when the economy is strong. And today the U.S. economy is firing on all cylinders. As such, rates have nowhere to go but up.

Interest rates have a major impact on the economy. When rates are low, money is cheap. Business can borrow money and expand at a lower cost. With high rates, the opposite is true. It’s more expensive to run a company and carry its existing debt.

That, in turn, lowers company earnings and weighs on share prices. Eventually, the fallout hits the broader markets. A study from Bridgeway Capital Management showed that after interest rates fall, the long-term average return on the S&P 500 is 13.3%. In periods when interest rates are climbing, the return on the S&P 500 is almost half that figure.

But rising interest rates are not bad for all stocks. In fact, some businesses actually benefit when interest rates rise. One type of business that fits this bill is business development corporations (BDCs). BDCs are companies that invest in small to medium-sized private businesses. Financially distressed businesses are their main target. BDCs are similar to venture capital funds, which are typically only open to institutional investors.

Even better, the right BDC can also act as a hedge against rising interest rates. The reason higher rates are good for BDCs is that it’s harder to secure conventional bank loans when rates are higher. Banks tend to hold companies to stricter standards since the cost of capital is higher.

There’s another reason: The number of U.S. banks has shrunk by 46% since 1998. Since there are fewer banks with a smaller pool of capital, they have become more selective. In 1994, banks held 71% of these riskier loans — also known as high-yield loans. That figure is down to just 9% today.

BDCs have moved in to fill this gap left by traditional banks. The thing is, BDCs can finance high-yield deals with small- and middle-market companies. Without BDCs, these companies would not have access to the debt they need to expand.

And these smaller companies must pay a handsome fee for loans. Interest rates are typically in the 10% range. That’s more than four times the average stock dividend and twice the yield on junk bonds.

Despite the high interest rate, these companies are clamoring for BDC capital. In 2010, the entire BDC market was valued at $18 billion. Today, that figure tops $45 billion.

And as interest rates rise, BDCs will be in even higher demand.

Those aren’t the only reasons why BDCs love higher rates. Unlike most traditional bank loans, BDC loans have a floating rate. As rates rise, so do the rates on BDC loans. The floating rates are almost always pegged to the 10-year U.S. Treasury bond


As the U.S. economy chugs along and rates rise, so will BDC income. This is especially true for BDCs that have a large portfolio of floating-rate loans.

The three BDCs I recommend are TCG BDC Inc.


All of them are solid companies with a high rate of floating-rate loans and high dividend yields.

As the economy keeps rolling and rates keep rising, you need companies in your portfolio that will benefit from this trend. And BDCs are the best way to do that.

Robert Ross is the senior equities analyst at Mauldin Economics and a core member of the portfolio management team since 2011. He has worked for Merrill Lynch and the Pelican Institute for Public Policy. Read his latest take on the market with a model portfolio in Mauldin Economics’ In the Money newsletter.

Asia-Pacific stocks surge out of the gate after U.S.-China trade truce