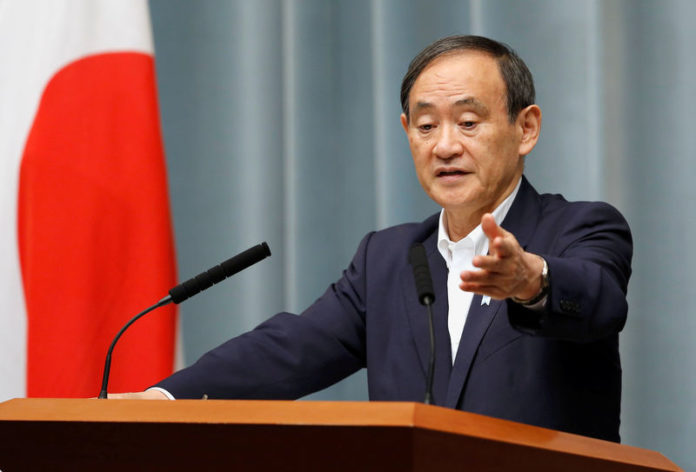 Chief Cabinet Secretary Yoshihide Suga, speaking during a recording of a TV program at Japanese broadcaster BS11, said Japan is ready to explain its stance in trade negotiations with the United States.

Suga also warned that the global rules of trade could be compromised if all countries simply pursued their own interests.

“I understand that it’s natural for countries to pursue their own interests, but countries should respect the rules of free and fair trade,” Suga said.

“Japan’s position is we want to promote these rules for the global economy,” he added.

The White House on Friday laid out objectives for trade talks with Japan as President Donald Trump’s administration seeks to slash the United States’ $69 billion trade deficit with the world’s third-biggest economy.

The United States is aiming to secure duty-free market access for American industrial products and reduce or eliminate tariffs for U.S. agricultural goods, according to a statement.

Washington is also seeking more equitable trade in the motor vehicle sector and will try to “ensure that Japan avoids manipulating exchange rates in order to prevent effective balance of payments adjustment or to gain an unfair competitive advantage,” the document said.

The Trump administration has agreed to not raise tariffs on Japanese autos during negotiations, but Japan’s economy would suffer a blow if the two countries cannot strike a deal and tariffs rise.

A few options available to Japan include buying more U.S. military hardware and , but it is uncertain whether this will satisfy the Trump administration.

Japan is also closely watching U.S. negotiations with China over tariffs and trade practices for clues on how to approach its own talks with the United States.

Suga said there are concerns about an “economic war” between the United States and China, the world’s two largest economies.

He called for restraint from both sides, but also warned that Japan’s economy could take a hit if the Washington and Beijing failed to settle their differences and retaliated with further tariff hikes.

Europe should be worried about Huawei, EU tech commissioner says

The stock market could suffer a ‘brutal dislocation’ if this level...