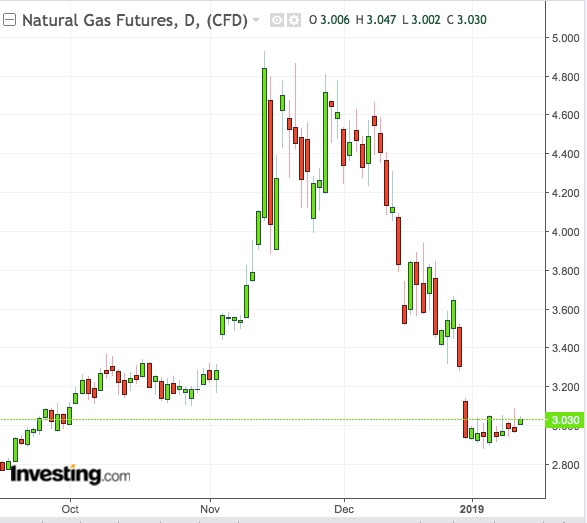 America might have more than enough fuel underground to stay warm this winter—a realization that could make some investors in break cold sweat.

Since the summer, gas bulls have chased prices higher, betting that extraordinary amounts of the fuel being pulled from storage then to power air-conditioners might result in dire shortage of supply to drive heaters through the winter.

The 2018/19 cold season that began with fall on September 23rd had one of the lowest pre-winter gas reserves. From initial highs above $3 per million metric British thermal units, the market surged to just 7 cents short of the $5 per mmBtu high mark nearly two months before winter began on December 21. Prior to that, $5 gas had only occurred in 2014.

Much of that bullish fervor has since faded. And even more could unravel as record high production of gas and a balmy start to the winter forced utility companies to store more of the fuel and draw less than typically needed at this time of the year for heating.

Deficit In Winter Gas Reserves That Bulls Relied On Is Shrinking

This means the huge deficit in winter gas reserves that market bulls had once counted on might soon be replaced by a surplus.

Thursday’s on supply-demand of gas released by the US Energy Information Administration showed the deficit versus last year’s reserves was at 7 percent now compared to 20 percent a month ago. That was after last week’s gas drawdown for heating came in at 91 billion cubic feet versus the five-year average of 187 bcf for this time of year and the gigantic 359 bcf withdrawal a year ago.

“The storage deficit has been squeezed down significantly in the past three weeks, and will take another hit in the next storage report.”

He was referring to the current week, which had begun warm again, until a sudden turn of cold from Wednesday.

Despite the bearish supply-demand numbers, gas futures on the New York Mercantile Exchange returned above the critical support of $3 per mmBtu on Thursday, only the second time this year that it had done so.

That’s giving bulls like Scott Shelton, broker at ICAP (LON:) in Durham, North Carolina, optimism that the winter rally in gas might happen after all, amid indications that the worst of the current warmth could be over. In a note issued Thursday, Shelton said:

“It appears that both the Euro and American weather models are starting to agree that this warm up is about over with cooler temps on the horizon. The question is whether or not they go colder than normal or just normal.”

Shelton also believes gas futures returned to the $3 levels because producers were unwilling to deeply discount physical gas for February, often the latest coldest month of any winter.

“I think the path of least resistance is up for now,” he added.

But Dominick Chirichella, director of risk and trading at the Energy Management Institute in New York, isn’t sure the weather is completely out of the woods yet. Said Chirichella in a note issued Thursday:

Reuters reported that for last week, there were 174 heating degree days, compared with 283 HDDs in the same week a year ago and a 30-year normal of 229 HDDs for the period. HDDs measure the number of degrees a day’s average temperature is below 65 degrees Fahrenheit (18 degrees Celsius). The measure is used to estimate demand to heat homes and businesses.

Going by last week’s HDD activity, Chirichella thinks “the call on Nat Gas for heating-related demand will still be below normal for this time of the year during this forecast period.” He added:

“I am maintaining my Nat Gas view and bias to cautiously bearish as the market is now below another range support level. The short-term weather pattern is projected to evolve back to above normal temperatures in key parts of the US.”

But Gelber & Associates’ Myers, who has seen gas prices swing as much as 20 percent in a day in recent months from misreading on weather, is prepared to give bulls some benefit of the doubt on the probability of severe cold in the coming weeks despite current forecasts. Said Myers:

“Much of the winter remains and just a few weeks of sustained cold weather and large withdrawals could place storage back into a precarious position before the season runs out.” 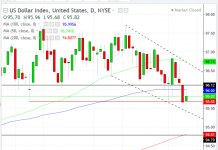 All The 2018 Christmas TV Movies Starring ‘One Tree Hill’ Favorites

Helios and Matheson to spin off MoviePass into a separate company