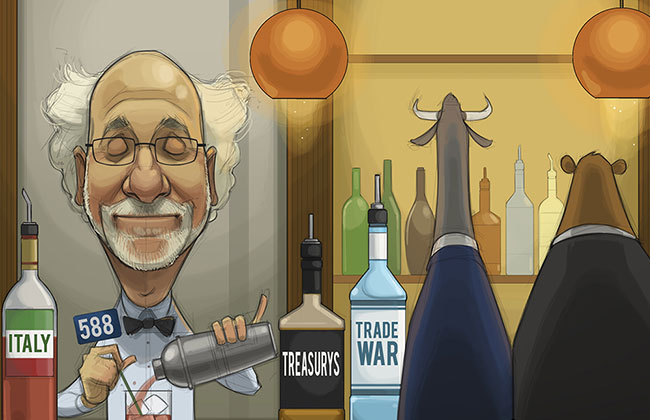 Investing.com – Global stock markets struggled this week amid a powerful combination of growing anxiety over rising Treasury yields and the impact of trade tensions on economic growth, as well as a brewing spat over Italy’s budget plans.

Yields on the benchmark touched a 7-1/2-year peak of 3.261% on Tuesday, but later fell back, while those on bonds hit their highest in more than four years, before retreating.

Treasury yields have surged recently following a batch of upbeat economic data that bolstered the case for the Federal Reserve to raise rates in December and beyond.

Bond yields are merely the latest in a series of major potential headwinds that investors are worried could end the market’s lengthy uptrend.

Traders also continued to watch for the latest developments with respect to .

Giovanni Tria, Italy’s finance minister, promised on Tuesday the government would do what is necessary to restore calm if market jitters turn into a crisis. However, Deputy Prime Ministers Luigi Di Maio and Matteo Salvini stood their ground on the country’s budget and deficit plans.

The developments have raised risks of a credit ratings downgrade for the country, with a knock-on effect for Italian banks which are big holders of .

Heightened fears about global economic growth returned to the forefront after the International Monetary Fund (IMF) that simmering trade tensions, such as those between the U.S. and China, could lead to a “sudden deterioration in risk sentiment, triggering a broad-based correction in global capital markets and a sharp tightening of global financial conditions.”

The IMF for 2018 and 2019, as well as its U.S. and China estimates for next year, saying the two countries would feel the brunt of the impact of their trade war next year.

China stocks higher at close of trade; Shanghai Composite up 2.57%...