Home Banking Stock investors, you have now been warned for the last time 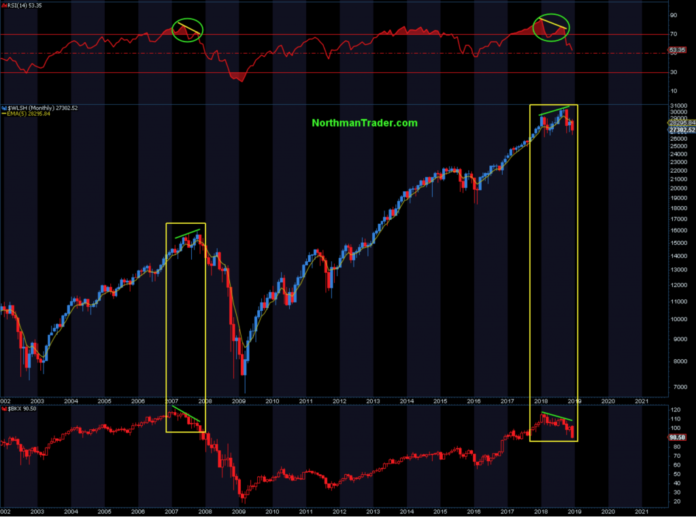 This year many technical and macro warning signs were ignored by investors and Wall Street alike.

Long gone is the record optimism that permeated the landscape not only in January but even as late as August and September. Wall Street analysts kept raising price targets on key stocks such as Apple


and telling investors to buy every dip. Only now are they downgrading those same stocks by 20%-25% from where they were in September.


components in a bear market, hopes are for a Santa Claus rally to save what’s left of a terrible investment year. And while markets may still see sizable rallies, the warning signs are still all around us, and they send a clear message: The 10-year bull market will come to an end, and the investing and trading climate is changing dramatically, possibly, for years to come.

Read: Frustrated traders say ‘neither bulls nor bears’ are in charge now

I’m outlining several of these key technical and macro warning signs as they are important to understanding what investors and traders have to contend with into 2019.

First, let’s be clear what happened in 2018: After liquidity infusions of $5 trillion in record global central bank intervention between 2016 and 2017 and the U.S. tax cut that followed, we witnessed a global blow-off top in January and then a 10% correction off historic overbought levels. The recovery that followed produced new all-time highs on select U.S. indices and stocks, while the rest of the world floundered amid slowing growth. These new highs on U.S. indices then triggered a familiar script.

Not only did we witness new highs on negative divergences on many indices, but the banking sector never made new highs and is currently down 15% on the year, drawing eerie similarities to the 2007 topping pattern. Something’s not right with the banking sector, and that raises the possibility that market highs are over for this cycle.

The year 2017 had record volatility compression. While the CBOE Volatility Index


returned to a quiet period this summer amid low volume and record buyback activity, volatility has broken free of its compression pattern. It’s a trend shift we can’t ignore, and it highlights an important point: Volatility is here to stay. While it will ebb and flow, 2019 will offer wild market moves in both directions, offering the prospect for a great trading year. Still, it is likely to dissuade investors from a long-held fantasy: That stock prices will go up forever.


up 10 years in a row, reached its limits in 2018 as it disconnected too far above its yearly 5 EMA (exponential moving average).

As FAANG stocks were printing new market-cap records (while underlying participation was thinning), those stocks reached unsustainable extensions above their historic moving averages. Reconnects are a normal part of markets, and excessive deviations do not last.

A reconnect is coming, and with it a rather dramatic and important realization: The bull-market trend will break.

Offering support multiple times this year, the 2009 trend is on the cusp of breaking on multiple indices. I’m using the Nasdaq 100 Index


as an example here:

The message: Once this trend line breaks, the bull trend is over.

The other big warning sign comes from the very Federal Reserve that is faced with a critical policy failure: Its attempts to normalize rates have run into a predictable wall: lower highs. After all, this has been the trend for decades now:

Rate-increase prospects for 2019 have plummeted following the slowest rate-hike cycle in history, with still real negative rates in place.

Just a few weeks ago Janet Yellen was warning of the economy overheating, and the former Fed chair who famously predicted no “financial crisis in our lifetime” is now out warning of such a crisis to come:

“I think things have improved, but then I think there are gigantic holes in the system. The tools that are available to deal with emerging problems are not great in the United States. … I do worry that we could have another financial crisis.”″

And don’t be quick to dismiss her warnings because she is no longer on the Fed. It is the Fed itself that recently issued a similar warning:

“An escalation in trade tensions, geopolitical uncertainty, or other adverse shocks could lead to a decline in investor appetite for risks in general,” the report said. “The resulting drop in asset prices might be particularly large, given that valuations appear elevated relative to historical levels.” (Emphasis added.)

And the Fed has a significant problem: Because it was so cautious and slow to raise rates while fueling another bubble, they now have, historically, much less ammunition to deal with a coming downturn, as former Dallas Fed Gov. Fischer has pointed out.

And that’s the global risk here. Central banks such as the European Central Bank and the Bank of Japan have never stopped intervening, yet growth has been slowing markedly as asset prices have declined significantly, with many global indices already in bear-market territory.

This year saw a yield scare, as the 10-year Treasury note


pushed up toward 3.2%. But it’s actually the retreat of yields from that particular level that serves as an additional warning sign.

Warning sign No. 6: Yields retreating off of a multi-decade trend line

In the overall context, this may be the most important chart right now:

For decades, central banks have reacted with lower rates to combat slowing growth. And each time, their efforts to raise rates again came to a halt as the next business cycle ended. The unemployment rate is at 3.7% while recession risks have been rising and many economists and CFOs are now expecting one to arrive in 2019 or 2020.

The message: The bull-market trend will break. You have been warned.

Sven Henrich is founder and the lead market strategist of NorthmanTrader.com. He has been a frequent contributor to CNBC and MarketWatch, and is well-known for his technical, directional and macro analysis of global equity markets. His Twitter handle is @NorthmanTrader.

Nissan to recall 150,000 more vehicles in Japan after improper inspections By Reuters

iPhone sales in India to dip for first time in four...