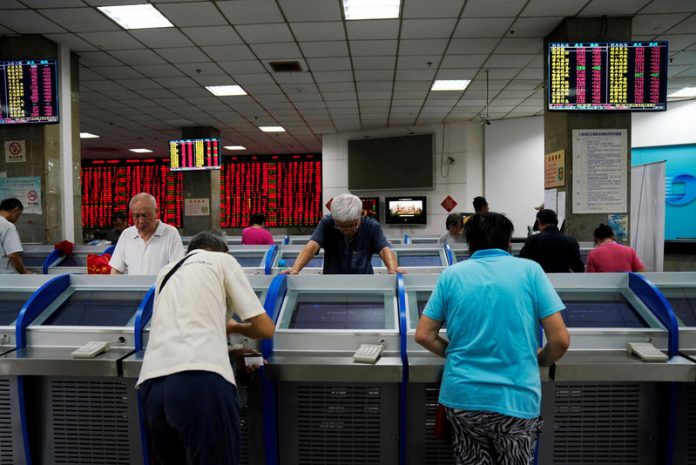 By Samuel Shen and Julie Zhu

SHANGHAI/HONG KONG (Reuters) – China’s ambitions for a Nasdaq-style board for start-ups have galvanized the country’s tech companies who are hopeful they can sidestep complex IPO hurdles and access easier funding.

The surprise announcement for Shanghai’s planned “technology innovation board” by President Xi Jinping in early November paves the way for a lower listing threshold, potentially scrapping a requirement that aspiring companies must be profitable.

For Beijing, the move is seen helping to counter U.S. curbs on its technology companies and may draw the next generation of high-tech firms to list at home. Some of China’s best known brands such as e-commerce firm Alibaba (NYSE:) Group and gaming and social media giant Tencent Holdings have listed in New York and Hong Kong.

Last year, Chinese companies raised $64.2 billion globally – almost a third of the worldwide total – via initial public offerings (IPOs), but just $19.7 billion of that came from listings in Shanghai or Shenzhen, according to data from Refinitiv, compared with $35 billion in Hong Kong.

The intense interest in the new board, even before rules are finalised, underscores the significance to private Chinese companies of having an alternative source of funding.

“Our business is in the field of network information security and coding technology, and we’re regulated by the (Communist) Party. So we cannot receive foreign capital or list overseas,” said Tan Jianfeng, Chairman of PeopleNet.

“The new board is a very good (funding) opportunity for companies like us, and we have plans to list there.”

According to the Hurun Report, China had 181 unicorns at the end of September, surpassing the United States as the country with the biggest number of start-ups worth at least $1 billion.

Since plans were unveiled by President Xi, officials have been scrambling to draw up detailed rules, expected to be published this month, with the aim of launching by June, the 21st Century Business Herald reported.

The new tech board, to be set up by the Shanghai Stock Exchange, will include a registration system – in effect removing official control of the IPO process that has for years produced a stop-start pipeline of listing candidates with a waiting time measured in years not months.

The board is also expected to allow listings from companies yet to make a profit – a common practice in tech-heavy markets such as New York and, more recently, on Hong Kong’s main board.

“For the venture capital industry, spring is coming. But I hope the spring is enduring, not a short-lived one,” said Andrew Qian, chairman and CEO of New Access Capital, a Shanghai-based investment and financial advisory firm.

Qian has recommended 11 prospective firms, or a sixth of his portfolio, to the Shanghai government, which will pick the city’s first batch of candidates to go public on the new tech board. Forms have been distributed to start-ups by various government bodies probing their appetite to list.

The excitement, however, has stirred memories of China’s previous tech-friendly efforts that drove Shenzhen’s tech-heavy ChiNext board to dizzying heights in 2015 before the broader market’s spectacular collapse.

But unlike its rival boards, ChinNext continued to slide and has lost around 38 percent over the past two years, compared with about 11 percent for the blue-chip CSI300.

The New Third Board, an over-the-counter market for start-ups begun in 2006, has also fallen out of favour with investors and is struggling to generate interest as liquidity runs dry.

“You need to pay attention to a company’s core technologies…if a pig farmer wants to list on the tech board, you need to screen it out, unless it makes epoch-making breakthroughs in breeding technology,” said Liu Guangfu, investment banking director at TF Securities.

Zhang Yu, executive director of China Equities at UBS Asset Management, warned that stocks on the board could easily become the target of pump-and-dump, because “many investors in China are not mature enough”.

DaoCloud, a Shanghai-based cloud computing start-up that has not yet broken even, said the new board meant it was considering an earlier IPO. It had planned to list around 2021 on ChiNext, which typically requires two consecutive years of profit.

“The launch of the new tech board is good news to us,” said Roby Chen, founder and CEO of DaoCloud, but he too is wary of bubble risk as many provincial governments begin mobilizing start-ups to prepare for listings on the new board.

“I’m quite worried. In China, when something like tech becomes a hot topic…it’s easy to become bubbly.”

Global debt is growing, IMF says, but so are values of...

Why farmers in Kashmir valley are still waiting for Prime Minister’s...