Home Finance Short-term boost or ‘the trigger that kicks off a brutal, worldwide, financial... 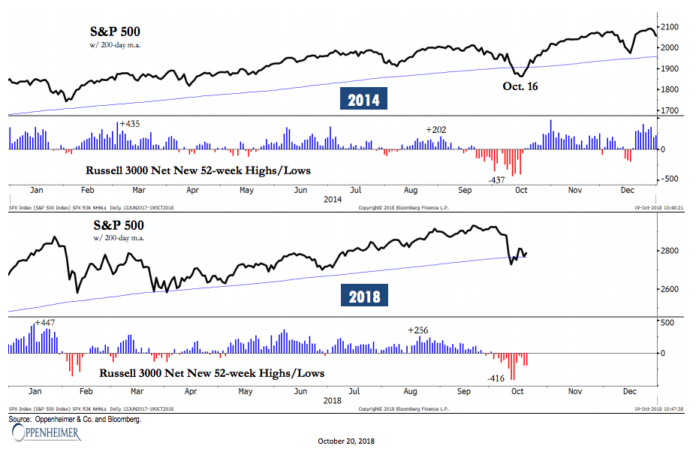 Just a couple of weeks until the mayhem of the midterm elections, and a serious bump in volatility


is keeping investors on their toes. One look at the overnight swings in the futures market provides the latest bit of evidence.

The silver lining is that if recent history is any indication, the choppiness might turn out to be a blessing for bulls. At least in the short term.

Our chart of the day comes from Oppenheimer’s Ari Wald, with a hat tip to the Reformed Broker blog. The illustration compares the run-up to this year’s midterm elections with what happened around the same time in 2014.

Wald points out that Ebola-induced fears triggered a bout of volatility back then, and it’s not too different than what’s going on today. Internal breadth was similar as well, with the advance-decline line on the NYSE peaking in July 2014.

“We show this comparison to refute the idea that current conditions argue for imminent disaster,” Wald wrote, pointing to the uptrend that took hold four years ago. “Still, similar to October 2014, there’s longer-term warnings that warrant monitoring.”

Our call of the day offers up a warning of its own, but more on that in a bit. First, let’s check in and see how bumpy it is out there.


all bounced off overnight lows to tip higher ahead of the opening bell. Gold


is off, while crude oil


is leaning higher, and the dollar


is flat. Green everywhere, although that could all change by the time you finish this sentence.

Overseas, China markets picked up where they left off Friday. Specifically, Shanghai


rallied more than 4%. The buying trend spilled over to Japan, where the Nikkei


, stocks got off to a stronger start as well.

Hasbro, Halliburton and KimberClark are on the earnings docket for Monday, in what will be a huge week for earnings, with big names such as Boeing

Stripe Chief Operating Officer Claire Hughes Johnson on Sunday lashed out at the internet economy’s overreliance on advertising, claiming that the consolidation of online power into a few hands has led to “unintended consequences.”

The AP got slammed for a tweet referring to the migrant caravan as an “army.” One reader asked, “Was ‘maddening horde’ voted too tame?”

Speaking of divisive topics, if this Ron DeSantis vs. Andrew Gillum debate is what we can expect to see more of in the coming weeks, get ready to be entertained. Or depressed. Either way, there were lots of highlights, including this gem:

This was the moment of the debate for me: @AndrewGillum gives the PERFECT reaction to DeSantis’ weird answer about Trump being a role model for kids. Perfect. And hilarious. #FLGovDebate pic.twitter.com/wP608iIxIA

Palisade Research’s Adem Tumerkan, in a post on David Stockman’s Contra Corner blog, warns a global dollar shortage “may be the trigger that kicks off a brutal, worldwide, financial crisis.” A dollar shortage, he explains, is synonymous with disappearing liquidity, and that means we should gird for more violent and sudden market crashes.

“The fear of rising ‘real’ U.S. interest rates and slowing economic growth (especially from China) is making investors rethink their positions,” he wrote. “Not to mention the cost of borrowing short-term dollars via LIBOR is indicating aggressive financial tightening.”

Tumerkan used this chart of the 3-month U.S. dollar LIBOR rate — which spiked to its highest level since 2008 — to show that the short-term borrowing of dollar denominated debt’s getting pricy:

“This isn’t a big surprise,” he said. “But what’s making me worried is just how costly and scarce these dollars are becoming. “Corporations worldwide borrowing dollars for business operations. And even ordinary citizens with mortgages and credit cards (which are mostly driven by LIBOR) will face higher interest payments.”

Tumerkan warned that the trend has been overlooked by the market for years because of the belief that the U.S. growth will pick up.

The latest action, however, should be “your wake-up call,” he said.

“Higher short-term borrowing costs and a stronger dollar both increase ‘tail risks’ (aka black swans) for global investors,” Tumerkan warned. “So keep all this in mind and don’t be surprised if the markets suddenly plummet again.”

“Donald Trump, who may be the only person more fond of lavish displays of arriviste gilt than the Saudis, is bedazzled by a Saudi pledge to buy billions worth of American weapons, just as he was flattered by the Saudi sword dance and weird luminescent orb seance on his visit to the kingdom” — Maureen Dowd, in a piece for the New York Times titled, “Step away from the orb.”

$1.6 billion — That’s how much is up for grabs in the Mega Millions drawing, which is set for Tuesday night. The new total would rank as the largest Mega Millions jackpot ever, well ahead of the $656 million pot won in 2012.

September New Homes Sales and the advance estimate of third-quarter GDP are the numbers to watch this week, but we won’t see those for a few days. As for Monday, the Chicago Fed National Activity Index will be released at 8:30 a.m. Eastern.

Read: To boost the economy, let’s change how we measure it

Smoking is bad. Being a lazy couch-potato is worse.

Speaking of your health, if you’re intrigued by the whole fasting thing, check out this piece from an expert on the subject.

The rise of Sinclair Broadcast Group


and the fall of America.


has some explaining to do after this one.

Denmark has the flattest work hierarchy in the world.

And finally, there’s the “falling stars” challenge: “Influencers post pictures of themselves lying face down, as if they have tripped while getting out of sports cars and private jets, spilling designer shoes, bags and even wads of cash on the street.”

Need to Know starts early and is updated until the opening bell, but sign up here to get it delivered once to your email box. Be sure to check the Need to Know item. The emailed version will be sent out at about 7:30 a.m. Eastern.