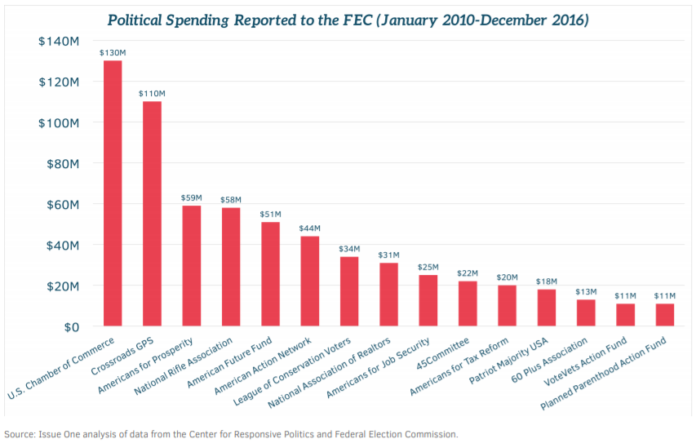 So-called dark money, which came into being after a Supreme Court ruling, soon may reach a ten-digit milestone.

That term refers to election-related spending by groups that don’t disclose their donors. This type of political outlay remains far from becoming dominant, but it keeps spooking researchers, lawmakers and activists, as it nears a big round number.

“We see dark money flowing into this process from both liberal and conservative sources, and in 2020 we will be reaching this milestone where $1 billion will have been spent by dark-money groups since Citizens United,” said Michael Beckel, manager of research, investigations and policy analysis at Issue One.

He was referring to the 2010 Supreme Court ruling in Citizens United v. Federal Election Commission that struck down a ban on political spending by corporations. Beckel, whose nonprofit organization aims to reduce the role of money in politics, was speaking at a recent event focused on dark money.

Far from the biggest source of funds

Getting to $1 billion shouldn’t be a big stretch, given the current estimates for how much has been spent in the shadows. More than $800 million has been shelled out to date since the court decision eight years ago, according to Anna Massoglia, a researcher at the Center for Responsive Politics, who also spoke at the event.

While it would be significant to have dark-money groups hit $1 billion in spending since 2010, that amount is far below what’s spent in just one election cycle by all groups. The 2018 midterm races, for example, sparked an estimated $5.2 billion in outlays alone, mostly by Democratic and Republican candidates, rather than dark-money groups or other outside organizations.

The $800 million spent to date by groups that don’t disclose their donors in the past eight years represents about 18% of all political spending by outside groups during that period, said Massoglia from the Center for Responsive Politics, a campaign-finance watchdog.

Dark money’s rise has been rapid, but it’s hard to predict if it eventually could make up 100% of all outside spending, Massoglia told MarketWatch. She noted some organizations want to publicize their spending, rather than hide it: “There are advantages to doing that, in terms of getting credit for what you’re spending on.”

The trouble with dark money

Dark money is a growing problem for candidates and voters, according to Issue One Executive Director Meredith McGehee.

“Talking to members of Congress — whether they be Republican, Democrat or independent — one thing they all fear is dark money, because it’s money that they have a hard time anticipating, responding to, understanding,” she said.

“And it’s really a big question for the American people, because when you don’t know where the money is coming from, it’s hard to do what the Supreme Court said you should be able to do as an American citizen — and that is to judge the message partly by who the messenger is.”

On the other side of the issue, former commissioner for the Federal Election Commission Brad Smith, known for opposing campaign-finance regulations, once wrote that dark money is “a term used not to enlighten, but to scare Americans into approving of sweeping new laws, invading privacy in ways never before seen in American politics.” Supporters of anonymity in politics have noted Thomas Paine’s famous “Common Sense pamphlet was published anonymously in 1776. They also have said that throughout history anonymous political speech has been attacked by entrenched powers but has helped challengers, and they’ve stressed that disclosures can chill speech and lead to the harassment of donors.

The big spenders and key vehicles

The U.S. Chamber of Commerce has been the biggest spender of dark money with an estimated $130 million paid out, according to Issue One’s recent “Dark Money Illuminated” report. It’s followed by Crossroads GPS, which is tied to Republican operative Karl Rove and has spent about $110 million, and Americans for Prosperity, which is funded by conservative billionaire industrialists Charles and David Koch and has shelled out $59 million. The Democratic-leaning spenders of dark money include Patriot Majority USA, with its $18 million in outlays.

Issue One said it was able to reveal some dark-money through back-door methods such as analyzing tax returns, looking at lobbyists and labor unions’ filings and examining other data sources.

The U.S. Chamber of Commerce, which lobbies for big business in Washington, didn’t respond to a question about whether it agreed with Issue One’s $130 million figure. “As a 501(c)(6) organization, the chamber complies with all applicable lobbying disclosure laws as we advocate for policies that grow the economy and create jobs,” the trade association said in a statement.

An FEC creation that looks set to stay alive

After the Supreme Court opened the door for corporate spending in elections, the FEC said existing disclosure laws weren’t a good fit for this new category of outlays, said Adav Noti, an attorney with the Campaign Legal Center, an ethics and campaign-finance watchdog. The regulatory agency then created a new disclosure rule that was “extremely narrow” and led to dark money’s rise, he said.

You don’t need judges to overturn Citizens United to end secret political spending, and you don’t need Congress to make a move, he added. You just need action by the FEC, but that is “simply not going to happen, at least not as the FEC is currently constituted,” said Noti, who worked as an FEC attorney for a decade. He doesn’t sound upbeat about seeing an imminent end to dark money.

The U.S. Supreme Court in September let stand a lower court’s ruling that required dark-money groups to reveal some secret donors, but then new guidance in October from the FEC was viewed as limiting that development’s impact.

FEC Chairwoman Caroline C. Hunter and Commissioner Matthew S. Petersen, both Republicans, blasted the lower court’s ruling in a joint statement, saying it had ordered a new expenditure reporting regime just two months before the midterm election and caused confusion. Commissioner Ellen Weintraub, a Democrat, had praised the judicial actions as “a real victory for transparency,” but then after the October guidance described the overall progress on the matter as “not as broad as some people had hoped.” Hunter, Petersen and Weintraub didn’t respond to requests for comment.

China stocks lower at close of trade; Shanghai Composite down 2.18% By Investing.com

CVS Reports Earnings Below ‘Reversion to the Mean’