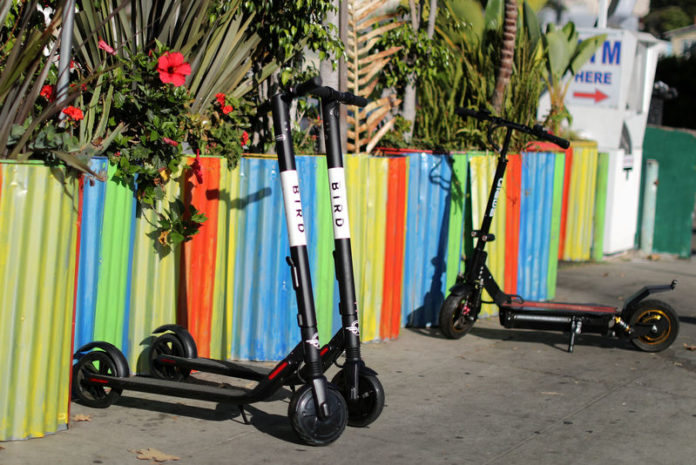 © Reuters. FILE PHOTO: Bird scooters are seen outside a restaurant in Santa Monica

The launch marks Bird’s entry into Latin America, a market that transportation startups and investors see as ripe for growth. The company also said it would expand its operations to Brazil.

Bird is operating out of a shared office space in Mexico City and has been recruiting locally for weeks, according to public job postings. It has hired some local staff and is building up a network of workers tasked with keeping the electric scooters charged, the company said.

Bird is still looking for a country manager, the company said, and in the interim a general manager based in Austin, Texas, will oversee Mexico operations.

Latin America has in general fewer regulatory hurdles for electric scooters than for car-hailing companies such as Uber Technologies Inc [UBER.UL], creating an easier path for growth, according to a Bird investor.

Bird has joined a trade association of mobility companies in Latin America, known as MaaS Latam, which is working to promote its services with regulators and local authorities.

However, questions about where scooter users should ride the vehicles, the impact on bicycle lanes, helmet laws and liability have concerned regulators globally, leading some cities to limit scooter permits. The dockless scooters have also posed safety issues when they are abandoned on sidewalks and in driveways.

Transportation startups of all kinds have looked to Mexico and Brazil for growth. The countries are two of Uber’s biggest markets globally, and China ride service Didi Chuxing last year acquired a Brazilian ride-hailing startup, 99, and in April brought its own ride-hailing network to Mexico.

Bird said last month that its e-scooter service has completed 10 million rides since launching a year ago. The company has raised $418 million and is valued at $2 billion, a large sum for a company just a year old.

Some scooter companies will struggle to live up to their valuations. In the last year, electric scooters have blanketed the streets of American, European and Chinese cities, and this proliferation is widely expected to result in price competition that could eat into profits and force consolidation in the industry.

In Brazil, Bird will face an already crowded market of local competitors, including Yellow, started by the founders of 99, as well as startups Ride and Scoo.

Want to delete Facebook? Read what happened to these people first

U.S. tech sector getting by without Facebook and Alphabet By Reuters