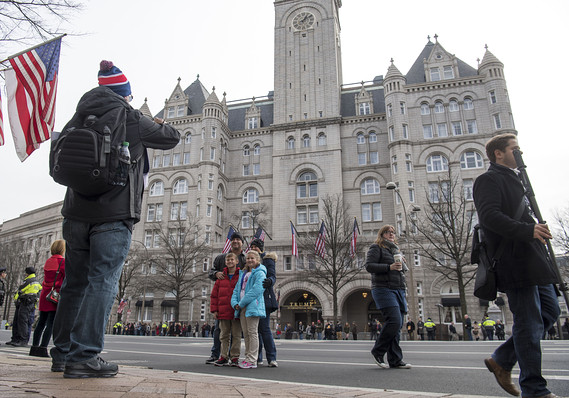 The Washington Post reports lobbyists representing the Saudi government reserved blocks of rooms at President Donald Trump’s Washington hotel within a month of his election in 2016 — paying for an estimated 500 nights at the luxury hotel in just three months.

Citing organizers of the trips and documents, the Post said that at the time the lobbyists were reserving large numbers of D.C.-area hotel rooms as part of an unorthodox campaign that offered U.S. military veterans a free trip to Washington, then sent them to Capitol Hill to lobby against a law the Saudis opposed. The bookings have fueled a pair of federal lawsuits alleging Trump violated the Constitution by taking improper payments from foreign governments.

The Post said Washington firm Qorvis/MSLGroup, which has long represented the Saudi government in the U.S., paid the organizers of the “veterans fly-in” trips, according to lobbying disclosure forms. The firm declined to comment. The Saudi Embassy did not respond to questions for the report. Trump hotel executives said they were unaware at the time that Saudi Arabia was ultimately footing the bill and declined to comment on the rates they offer to guests.


Satya Nadella are expected to be at the White House for a meeting Thursday described as a relatively routine affair. It’s a far cry, writes Axios, from the contentious early days of the Trump administration. Much has shifted since last year’s meeting, where Apple’s Tim Cook told Trump to put “more heart” into the immigration debate and some CEOs looked pained to be with Trump, Axios says.

A White House spokesperson said in a statement that the attendees would “discuss efforts to advance American leadership in innovation, and the future of American industries, jobs, and our economy.” It’s unclear whether Trump will attend.

VA diversity chief told not to condemn white nationalists: The Washington Post is reporting that a top White House appointee at the Department of Veterans Affairs sought to silence the agency’s chief diversity officer, who — in the aftermath of last year’s racially charged violence in Charlottesville — pushed for a forceful condemnation that was at odds with Trump’s response.

Citing newly disclosed emails, the Post says the tense exchange between Georgia Coffey, a nationally recognized expert in workplace diversity and race relations, and John Ullyot, who remains VA’s chief communications official, occurred during a low point in Trump’s presidency: when he blamed “many sides” for the deadly clash in Charlottesville without singling out the white nationalists and neo-Nazis who rallied there.

Harris staffer resigns: Politico reports Larry Wallace, a top aide to Sen. Kamala Harris, resigned Wednesday, amid allegations of harassment during his tenure at the California Department of Justice. “We were unaware of this issue and take accusations of harassment extremely seriously,” Lily Adams, a spokesperson for Harris, a California Democrat, said in a statement. “This evening, Mr. Wallace offered his resignation to the senator and she accepted it.” Wallace’s resignation came after the Sacramento Bee asked about a $400,000 settlement to end a lawsuit from Danielle Hartley, who was Wallace’s assistant at the California Department of Justice.

Manchin role rankles progressives: Sen. Joe Manchin of West Virginia is likely going to be the top-ranking Democrat on a powerful energy committee in the next Congress — and that is not sitting well with various voices on the left, the Hill reports. Manchin won his election in November by championing the coal industry and emphasizing his relationship with Trump. He is favored to be the ranking member on the Energy and Natural Resources Committee, which oversees the Department of Energy and Interior Department.

Washington Gov. Jay Inslee, a Democrat, launched a petition drive asking Democratic leaders to stop Manchin, the Hill says. “The fate of the planet right now has got to trump any seniority system of the U.S. Senate,” said Inslee, a potential 2020 hopeful.

As election clouds clear, get ready for the rush back into U.S. stocks, says...

Data is new oil, and RBI says store it in India: Here’s all you...

Turkey stocks lower at close of trade; BIST 100 down 0.47% By Investing.com

Why the Dow tumbled 600 points and the Nasdaq fell into...