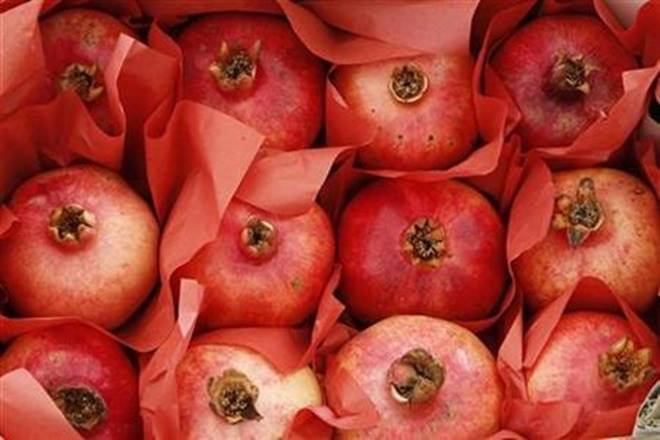 With a bumper pomegranate season in full swing, around 85,000 tonne is expected to be exported during 2018-19 season.
However, several countries including Europe, Russia, Indonesia and China have imposed stricter Residue Monitoring Plan (RMP) for pomegranate imports from India this year.
“The Residue Monitoring Plan (RMP) for grapes in Europe is normally 75 mg per kg but for pomegranates it has been brought down to 2 mg per kg thus making it difficult for pomegranate growers in the country to export the fruit,” said Prabhakar Chandane, chairman, Maharashtra Pomegranate Growers Research Association (MPGRA).
“We have written to Agricultural and Processed Food Products Export Development Authority (APEDA) to intervene and seek concessions from the European Union (EU) for bringing down the limits to 10 mg per kg,” Chandane said.

The association sought a similar concession last season without success. “Despite drought, pomegranate production is likely to touch 15 lakh tonne and exports should be around 85000 tonnes,” he said.
Out of 75000 tonne, nearly 10,000 tonne is likely to be exported to Europe, 30,000 tonne to Bangladesh, 40,000 tonne to West Asia and 5000 tonnes to other countries. The first crop of the season is likely to come up in July to September period.

Normally, the export season begins in November every year and is completed by March. This season is not considered conducive for export to Europe.
For the current season, pomegranates have been cultivated on some 1.80 lakh hectares of which 1.30 lakh hectares is in Maharashtra. However, on account of the drought, nearly 30% of the crop could be affected and still some 15 lakh tonnes should be available for consumption, Chandane said. Chandane however, complained that farmers were getting prices to the tune of Rs 50-60 per kg in the domestic market at an average of Rs 20-25 per kg in wholesale rates. “Because of the drought, good size of fruit remains a challenge,” he said.
Last year, nations including China, Indonesia and Russia, had decided to issue stricter Residue Monitoring Plan (RMP) norms on grape imports from India.
India however, is looking to make inroads into new export markets such as China, Russia, Indonesia and Saudi Arabia.

Last season, around 2 lakh hectare had came under pomegranate cultivation and total production crossed around 20 lakh tonnes. Significantly, a record 51,000 tonne of the fruit was exported to overseas markets including Europe. Normally, the country exports some 20,000 tonne pomegranates. Meanwhile, European markets look saturated with the arrival of pomegranate and grapes from Peru, Chile and South Africa, effectively challenging Indian exports.
In the past India has also exported pomegranates to Bangladesh, Bahrain, Sri Lanka, Russia and the Netherlands. Maharashtra contributes 90% to the country’s total pomegranate production. The state leads the pomegranate cultivation with approximately 1,75,000-2,00,000 hectare and other states totalling 30,000-40,000 hectare. Solapur is the largest producing region followed by Nashik and Sangli. New areas under pomegranate production include Nagpur, Latur, Osmanabad and Washim.

The Brexit Killing Season By Bloomberg

How modern cities can adapt to make themselves friendly for scooters and bikes in...

These 4 southern states bring half of India’s overseas remittances; Kerala...