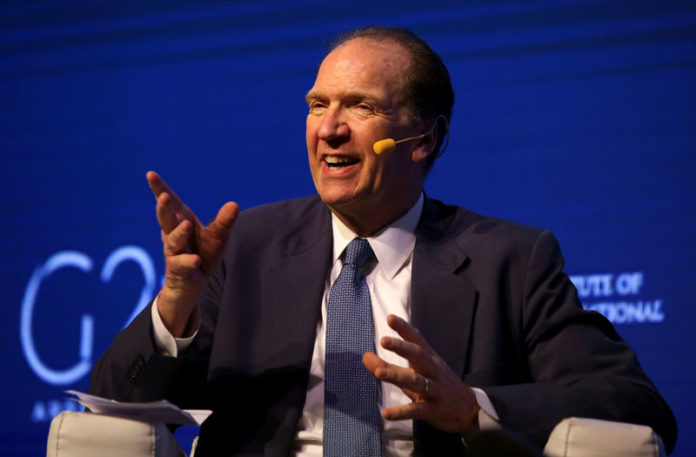 © Reuters. FILE PHOTO: David Malpass, Under Secretary for International Affairs at the U.S. Department of the Treasury, gestures during the 2018 G20 Conference in Buenos Aires

WASHINGTON (Reuters) – Pakistan is likely to pay off an International Monetary Fund bailout before its loans from China come due, easing concerns that IMF funds will be used to pay back Chinese creditors, the U.S. Treasury’s top diplomat said on Tuesday.

David Malpass, the Treasury’s undersecretary for international affairs, told a U.S. Senate Foreign Relations subcommittee hearing that the Trump administration was pushing for more transparency in Chinese lending, including to Pakistan.

Pakistan is negotiating with the IMF over terms of its second bailout since 2013, a loan package valued at about $6 billion, according to local media, with a deal now expected in mid-January.

Pakistan is a major recipient of China’s Belt and Road infrastructure initiative, with Beijing pledging to finance some $60 billion in port, road and railway projects there. But Pakistan’s debt woes have prompted Islamabad to scale back some of the projects.

“One of the challenges is that in many cases they haven’t disclosed the terms of that debt,” Malpass said of the Chinese loans to Pakistan. “In general terms, we think the maturity of the Chinese debt comes after the IMF would have been repaid.”

Secretary of State Mike Pompeo said earlier this year that there was “no rationale” for a program that repays Pakistan’s loans to China.

Malpass said the challenge in the Pakistan-IMF talks is to forge a program that will foster “substantial economic reform” in Pakistan and put its finances on sustainable path.

A U.S. Treasury delegation was recently in Pakistan to work with local officials, he added.

Malpass also said a lack of transparency in Chinese lending was not unique to Pakistan, noting that basic terms like the interest rate and maturity are often not disclosed, sometimes even to some parts of the borrower governments.

“China is lending in many countries where the terms of the loan are simply not given and that gives China a lot of leverage within its program,” Malpass said. “And it’s something that we’re pushing back on very hard in the Paris Club, in the OECD, in the IMF, the World Bank, at the G20 and in the G7.”

Earlier on Tuesday, China’s ambassador to the United States, Cui Tiankai, pushed back against any suggestion that China’s infrastructure loans were causing debt crises.

“How can you say building roads and bridges will hurt their economies?” Cui told Reuters in an interview.

“If they do not need it, they will not ask us to build it. That’s quite clear. All these things are done based on mutual agreement between the countries concerned and China.”

U.S. says it cannot support some of EU’s ideas for WTO reform By Reuters

Sears skips payments to vendors amid bankruptcy concerns By Reuters