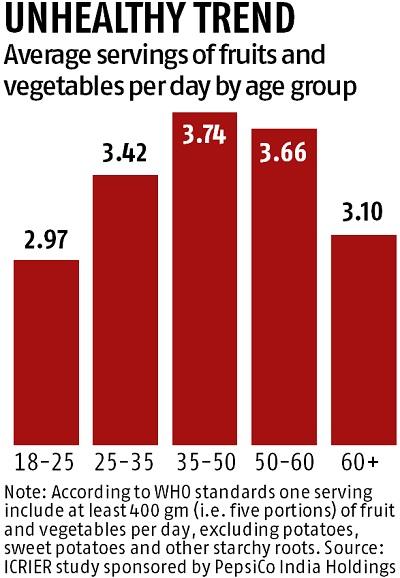 More than 56 per cent of students in classes 5-12 in the National Capital Region (NCR) consume less vegetable than recommended by health professionals and just 27.2 per cent of them take fruit regularly, a study by the Indian Council for Research on International Economic Relations (Icrier) shows.


The study, which is on the intake of fruit, vegetables and juice by school-going children, and nutritionists and dieticians and sponsored by PepsiCo India Holdings, found the average intake of vegetables was more in students of government schools than their peers in private schools (more likely to come from more well-off families).


According to Indian dietary patterns, published by the National Institute of Nutrition (NIN), Hyderabad, every average individual should consume around 400 gm of vegetables, including 50 gm of green leafy vegetables, daily; 200 gm of roots and 50 gm of tubers, along with 100 gm of fresh fruit. The Icrier study takes these as the benchmark.


The study showed that around 34.5 per cent of the students surveyed preferred fruit for breakfast while 16.3 per cent said they had fruit as part of the evening meal.

U.S. retail sales are soft for the second month in a row

HSIL eyes revenue of over Rs 500 crore from consumer business...