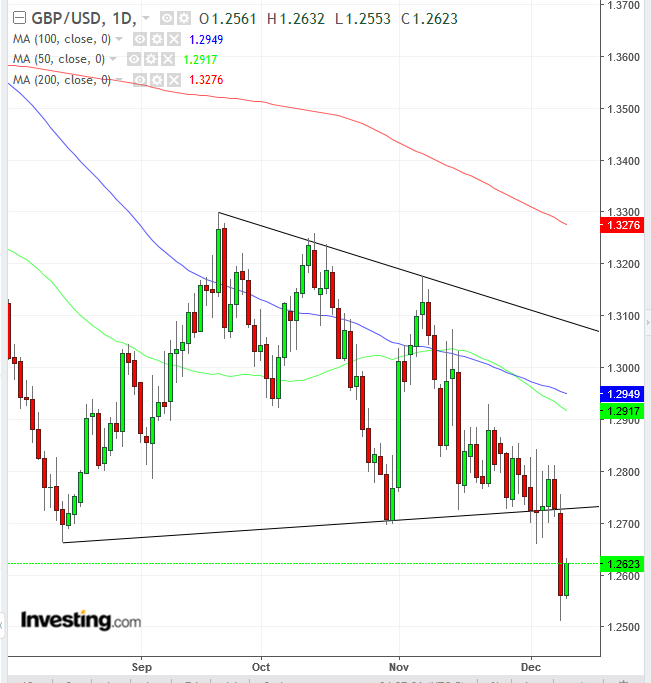 Global stocks are mixed this morning, with US futures—including for the , and —all heading higher, after yesterday’s roller coaster session on Wall Street. While headlines keep blaming the botched US-Sino trade talks, inter-market analysis doesn’t support that narrative.

The opened 0.53 percent higher today, extending the advance to 1.1 percent at one point, though sellers have pushed gains down a bit, at time of writing +0.95%. The advance erases most of yesterday’s losses, which pulled down the pan-European index to its lowest level since December 2, 2016. Miners and technology shares led the gains, despite their sensitivity to tariffs.

The UK’s rebounded from yesterday’s slump, along with , after UK Prime Minister Theresa May delayed a critical vote on Brexit.

Technically, the pound bounced back from yesterday’s slide, which took the currency down to its lowest levels since April 14, 2017. The move is considered a corrective return after the currency yesterday completed a symmetrical triangle, bearish in a downtrend.

Reports that Chinese Vice Premier Liu and US Treasury Secretary Steven Mnuchin , appear to have buoyed market sentiment this morning. That claim, however, isn’t completely convincing. As long as the chief financial officer of Huawei (SZ:) remains in Canadian custody even as the US continues to seek her extradition on multiple criminal charges, casting a shadow on any hope for a trade agreement in our view.

In Asia, China’s gained 0.37 percent, allowing Australia’s to outperform with 0.42% due to its reliance on Chinese demand. On the other hand, Japan’s slumped 0.31 percent. This counterintuitive move, Chinese investor resilience when their markets are in the crosshairs of the trade war with the US, may be attributed to how low the mainland benchmark’s share values have become. The regional benchmark is down about 21 percent YTD. Conversely, Japan’s index is only 7 percent lower for the year.

During yesterday’s US session, the heart-stopping volatility ended in a bear trap for day traders, as . Shares posted a lower trough in the medium-term decline, only to recover and finish the day higher.

The gained 0.18 percent, significantly trimming the earlier 2.07 percent plunge, the index’s lowest level since April 4. Technically, the highly followed benchmark posted a new trough in the medium-term downtrend, but closed as a hammer, with an exceptionally long lower shadow, demonstrating bullish resolve. A close beneath the hammer’s low would suggest continued selloffs, while a close above 2,660 increases the likelihood of retesting the 2,800 consolidation high. 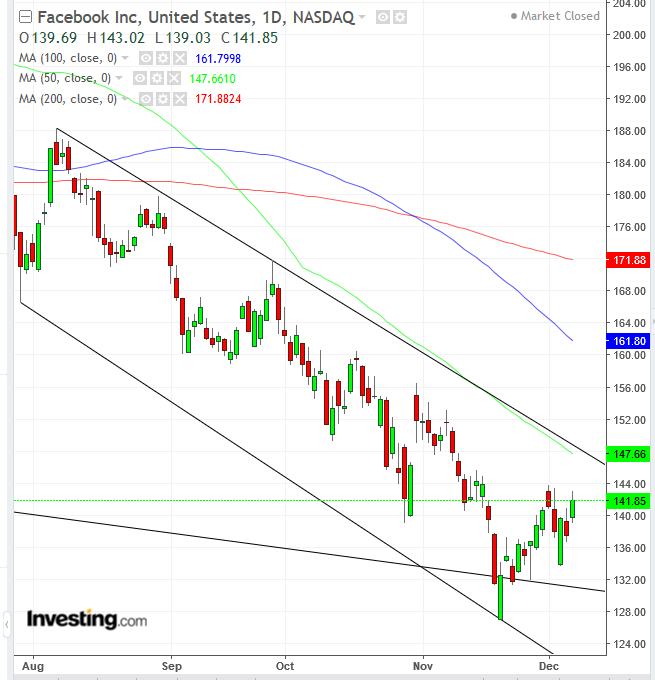 Additionally, it didn’t hurt that Deutsche Bank named the social media behemoth the top large internet stock with an “extremely attractive” valuation . FB’s stock price jumped 3.22 percent on the news. Technically, however, the price closed below its December peak and is trading within a descending channel since August, whose resistance is confirmed with the 50 DMA. The 100 DMA crossed below its 200 DMA and is struggling against the bottom of a massive bearish pattern.

The climbed 0.14 percent, rebounding from a 508-point, or 1.91 percent intraday decline to its lowest level since May 4. Technically, the intraday low registered a new trough in the medium-term, but the higher close both formed a bullish hammer with a very bullish lower shadow, which pushed the price back into the consolidation to boot, making a retest of the 25,500 level plausible. 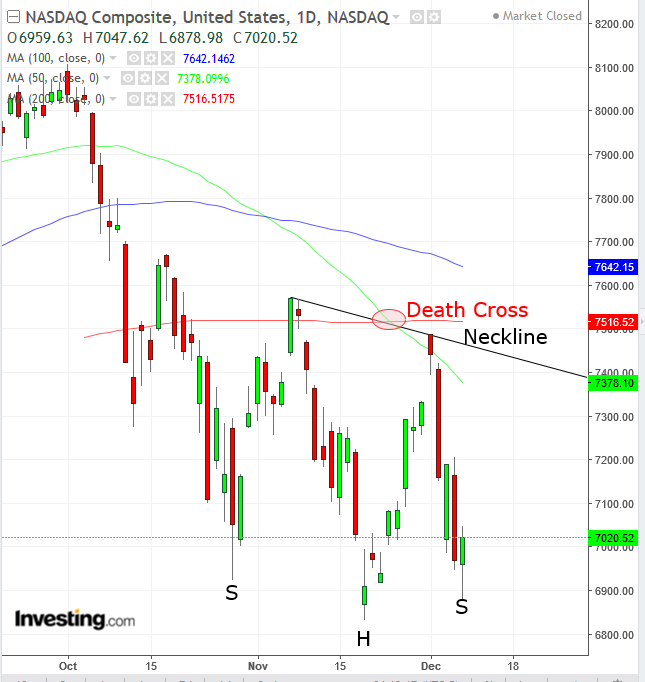 The tech-heavy pushed higher, +0.74 percent, rallying from a 1.16% decline, making it the best performer among the US major indices. It rebounded from its October 29 low.

This paints a picture of a potential H&S bottom reversal, whose neckline is “guarded” by a Death Cross. The dichotomy of a potentially bullish pattern after a bearish event clearly reflects the current investor ambivalence about the market, in which a single event, such as a US-Sino agreement—or the lack thereof—can turn markets around.

Small caps were the only index to lock in losses, but even those were well off the day’s lows.The was the only US benchmark to end with a loss, (-0.26%), underscoring our oft-repeated point that the facts on the ground are at odds with the market narrative, which keeps assigning the blame for losses to the trade dispute.

If yesterday’s selloff was the result of concerns about higher tariffs, small caps should have outperformed, since those companies tend not to international markets for growth. Conversely, technology businesses, which are highly dependent on cheap and safe exports, should have languished.

All numbers were correct as of time of writing