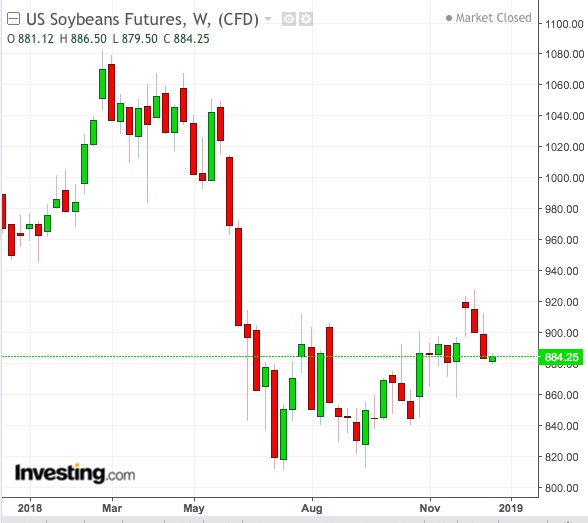 When US President Donald Trump clinked glasses with his Chinese counterpart Xi Jinping in Argentina on December 1, American soy farmers more than any other constituency were watching closely, filled with hopes for their product. But as the days passed, little progress came despite a hold in the tit-for-tat tariffs that had earlier strangled US exports to China.

Now, with less than a week left to 2018, only two consignments of American-origin soybeans have reportedly passed into China since the historic Trump-Xi summit that led to a temporary trade truce between the two nations. Prior to that, China had a 25 percent tariff on US soybeans in retaliation for a Washington duty on $34 billion of Chinese imports.

Prices Down 8% On Year

And as markets closed for Christmas, Chicago-traded soybean futures, which set world prices for the oilseed, were on track to finish the year down 8 percent.

Jack Scoville, grains analyst at The Price Futures Group in Chicago, wrote in a Christmas Eve note that despite China being expected to buy more US soy in the coming weeks,

“the market knows that there are plenty of soybeans to sell from the US and South America.”

Referring to Trump’s threat to reinstate tariffs on China if a satisfactory outcome wasn’t reached on the trade war within 90 days, Scoville added:

“There are no guarantees that the overall trade dispute will be resolved in the next three months, and the trade war could intensify if an agreement is not found.”

Scoville also noted that ending-stock projections for US soybeans were “very high” and concluded that this “gives little reason to expect a major rally anytime soon”.

On paper, that meant a downside of another 1 percent. In reality, the market could lose more.

Shawn Hackett of Hackett Financial Advisors, an agricultural markets consultancy in Boca Raton, Florida, sees no bullish case for soybeans in the near term. In a recent note Hackett asks:

“Everyone knows that we have arguably one of the most fundamentally bearish soybean markets since 2005 with very large crop potential remaining in South America. How much more upside can there be based upon a trade deal until the longer-term bearish fundamentals take over?”

“It will take Mother Nature to get involved in South America to provide dramatic upside beyond $10 per bushel from a credible trade deal.”

“Chinese export buying, while coming, is not showing up all at once. Buying the rumor and selling the fact seems to be the mentality. South America weather forecasts all show good growing conditions and support for soybeans still seems to be about 10 – 15 cents lower on the charts.”

More than any product involved in the trade tariff war, soybeans are one that could prompt the US to settle. Soybeans, and their associated product, soymeal, are used in China to feed pigs grown for pork, the country’s top protein source. China obtained 60 percent of its soy needs from the US during the 2017 crop marketing year ending September, in sales worth some $12 billion. But if the trade feud drags on, it could cost an estimated $4.6 billion in US soy sales this crop year, hurting hundreds of thousands of farmers—many of whom operate in the red states that voted for Trump in 2016.

No Smart Move Till Selling Ends

Since the Trump-Xi meeting, China has bought a total of 2.3 million metric tons of US soybeans, in two consignments of under 1.2 million each. Meanwhile, Argentina is projecting 14 million metric tons in soy exports to China this year, double last year’s figure and outpacing the 2009-10 record of 13.3 million. Brazil alone sold nearly 5 million metric tons of the oilseed to China last month, as growers in the two Latin American countries move aggressively to grab the spoils of the US-Sino trade conflict.

And while American soy farmers were looking for buyers in Europe, the Middle East, North Africa and other parts of Asia, global supply appeared well beyond demand.

That, said Hackett, signals that “the ideal time to sell soybeans may still remain in front of us.” He added:

“As such, we do not see anything smart to do other than for those that need to make cash sales to generate some extra cash or for the buying of some put options to keep topside open and protect downside with a floor, in case the deal is thwarted.”

Global growth has plateaued at 3.7 per cent; clouds on the horizon: IMF

Facebook expects rising costs to combat scandals to moderate after 2019

Chart Of The Day: NASDAQ Showing First Signs Of A Market Correction?

Alibaba Backpedals On Promise To Bring 1 Million Jobs To U.S.,...

China’s Ethanol Love May Be Antidote for Slumping U.S. Farms By...